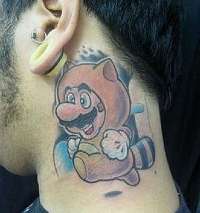 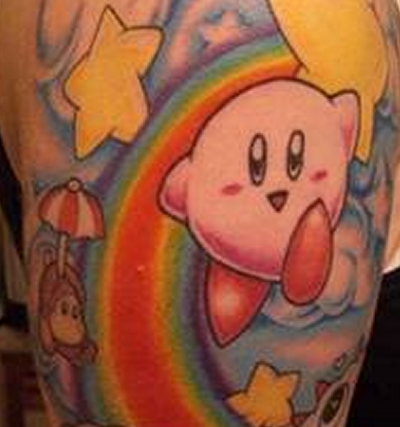 Tattoos, like video games, sometimes struggle to be seen as art. The fact that people get tattoos all over the world is a testament to the power of the imagination. No matter why you get one, it is always an intriguing and important statement.

Some people look down on others for getting a tattoo, but self expression is an important art form. This article will speak specifically about people who have gotten tattoos because a certain character on a game inspired them.

Mario Brothers Suit: One of the best and cutest tattoos around is definitely that of Mario in the raccoon suit from Mario Brothers! Not only is this tattoo artfully done, it is in a place that will definitely be seen by anybody in this picture.

Mario and Luigi: This is a cute, but seemingly painful, tattoo of two of everybody’s favourite Nintendo heroes! Mario and Luigi fight it out on this person’s feet, giving an impression that they are still holding the lives of come people up by giving them something solid to stand on.

Pac Man Hands: This game is one of the first ever and obviously will never lose its popularity. It is only fitting that two of the most renowned characters and their favourite food end up on the very body parts that have played them for so many decades!

This Mario Tattoo Has It All: This is the best and most detailed of any Mario tattoos on the Internet, from what can be searched for. For anybody who knows about Mario Brothers, this has almost all of the important characters such as Mario, Yoshi, Wario, Princess, and many others.

Spider Man Erupts: This is an artfully done tattoo of the great suit that spider man is known to wear. He would be proud to see someone walking in his superhero footsteps. This tattoo says it all.

Final Fantasy: The super villain in the Final Fantasy game is back in this awesome back tattoo of Sephiroth! No longer do people have to wait to see him in a game, this fan devoted their own back to display a favourite character.

Mega Man: This is an artfully done and extremely pixilated tattoo, but it looks much like the original Mega Man! This tattoo is apparently done in a way that it should look pixel-like. This is definitely one of the most original tattoos of its kind.

Mario Sleeve: There area great many people who want sleeve tattoos that cover their entire arm. This lovely sleeve tattoo of a fireball wielding Mario in front of a castle is one that has drawn attention from all over the world.

Flowers and Bombs: This tattoo represents two of the biggest dangers of Mario Brothers. The walking bombs and the piranha plants call this their home. Not only is this tattoo important in villain aspects, it is beautifully done in a tasteful manner.

World of Warcraft: Murlocs are one of the most hated monsters in Azeroth. This one, however, drew the attention of someone and was made a permanent part of their body. Obviously murlocs aren't that bad if people get tattoos of them, right?

Kirby: The cute and cuddly pink bubble of a hero is back in this lovely and well done tattoo. You can see Kirby running down a rainbow underneath of a golden star, as happy as can be.

Zelda Window Tattoo: This is one of the most detailed and beautiful pieces on the Internet. Made in a stained-glass cathedral window manner, this tattoo includes Link, Zelda, the Tri-Force, and a castle! This is definitely one of the best detailed tattoos out there.

You can support Mary by buying Game Tattoos I Love