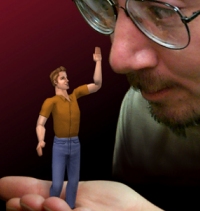 Like any art, a huge amount of work goes into creating a game. And much more than depending on a spark of inspiration or genius, it is the effort of these teams that creates the remarkable experience that move us.

Just because you can buy games for a few pounds, you shouldn't forget just how many creative lives have been invested to deliver these pieces of art. Here's just a few of the components of a modern gaming experience.

An Idea: No game would exist unless someone woke up one morning and had a great idea for a game. Regardless if this game is a strategy game, role playing game, or first person shooter, this will always be the first step of creating any video game. The fact that there are so many people in the world makes it apparent that there are limitless ideas for video games.

Documented Design: An idea is a lovely thing to have and be able to keep track of. This is why a design document is crucial for anybody who thinks they have a game that will be a major hit. This is simply a group of ideas put together in logical order that make sense, so that others get a feel of what you are trying to create. Creating a very good game design document can actually mean the difference between a person simply taking it and creating the game, and a person that requires a great deal of help. Detail is what will make the game come to fruition, so add as much as you can. In essence, a game design is what the game is about, the storyline, characters, plot, and anything else you can think of. This is important for the technical design document mentioned later.

Developers: Once you have an idea written down in a form that people can work with you must seek out people who actually know how to design and develop a game. These people generally know exactly what to do in this area of work, have done it before, and are experts. It is generally a good idea to get people that have taken college classes and have a resume - that way you know they are dependable.

Financial Backers: Nothing happens in a business if you don't have a person who can pay everybody who is working. In order to create a video game a person needs to have enough financial backers so they can afford to pay people working on the game. Drawing out a great design and action plan for the game will be a great thing in order to get someone to donate money to your cause. You also need to find a person who will publish your game and get it out into the world.

Prototypes: After you find all the people you need to complete your game, you must come up with a suitable prototype to shop around to different managers and agents. In order to show that you are actually going to go through with your game people need to be able to trust that the design is effective and entertaining. A boring prototype will get nobody’s attention and be a waste of time. Spending extra time on this step will guarantee you do better then if you just quickly drew one out.

Technical Design: Much like the game design document, this is the more in depth document that explains to people the inner workings of the game. Instead of focusing on what the game is about, this explains the types of technicalities and system requirements that the game is going to need. This is crucial to people because it will determine what is needed to make the game run smoothly. Having a game that runs choppily and doesn't work fast is never good, hence the need to work hard on this step.

Game Engine: The game engine is essentially the brain of the game. This part of creating a game is important because it determines what happens in the game at certain areas. Many people decide to purchase and use an existing game engine for this step, as it will save heaps of time, heartache, and possible malfunction. The game engine essentially is the item responsible for any mathematical calculations in the game, not the way that things advance and change.

Art: This is probably the most important visual aspect of the game - it actually is the complete visual aspect. Codes, ideas, and storylines are great, but if a person cannot actually see what they are doing in a game, it takes a great deal of fun out for people. This is when you must hire and incorporate graphics designers and concept artists into your budget, so they can effectively give your game the life it so desperately needs. This also applies to any music in the game, character voices, sounds, 3D graphics and movies, and different areas of the game. It is one of the largest parts of a game, and needs to have professionals and experts working on it.

Testing: Once you think the game is ready to be played by people, you must have others test it out to find any problems. There are many things in a game that may be confusing to people. These things can come in the form of quest that is exceedingly difficult, items that don't show up, characters that don't do anything, and a great deal of other problems. These are known as bugs, and can damage the game-play. By hiring testers or people who love playing games, you will effectively weed out any little problems before the game is released into the stores. This is a very important step, and should not be ignored even if it takes a while to finish. Also, having a variety of people playing will enable you to find any trouble spots. Every person sees things differently.

Launching: When a game is ready you need to find the correct way to get it in the hands of the right people. Supplying the game to one single game seller is generally not a good idea. You should spread your resources and finances out to multiple people who can sell your game. This way the game is introduced in many areas at once, instead of one.

You can support Mary by buying Art is Work