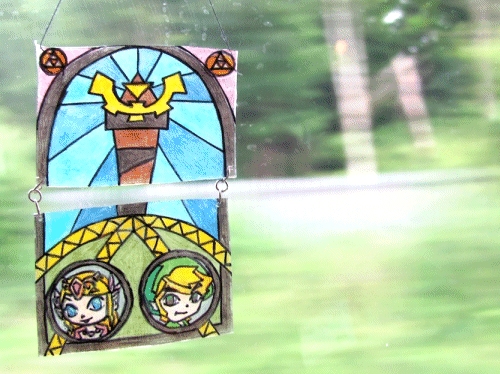 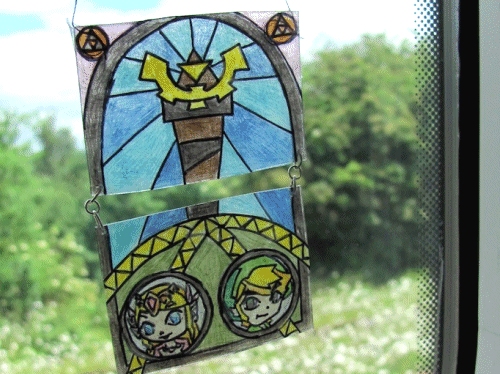 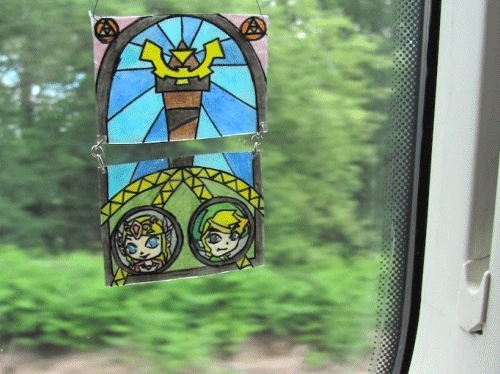 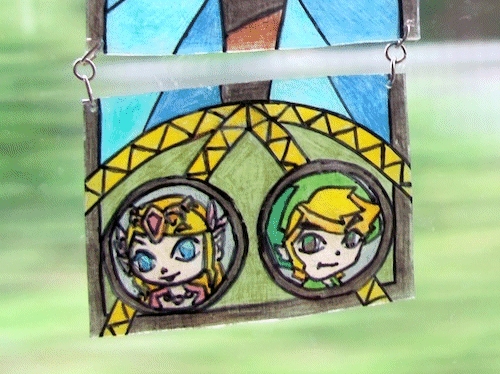 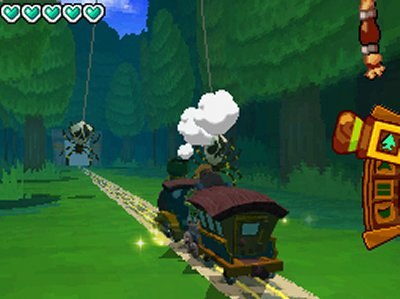 Zelda Spirit Tracks on the DS is a world to lose myself in. This stained glass window is my homage to all those joyful hours in Hyrule that made my real world train journeys go so fast.

I don't play Zelda for surprises or the tension of being pounced on any second, but because it's what I know and love. Hyrule, more than any of the fictional Nintendo kingdoms, is a place of escape, magical but not too unreal or silly. Folksy and rich but not too complicated.

This is a place I know too well. In fact I sometimes forget that these characters don't remember me. Why didn't Zelda recognise Link when he first appeared? It feels like love spurned! She even has a picture in her throne room to remind us of the good old days of previous episodes.

But then I remember the myth and smile as wise old Anjean explains how Tetra first came to these parts generations ago and the current characters are just the latest incarnations of a very aesthetically consistent heritage.

Even though it can feel a bit forced, this shoehorning of our little green pixie outfit into every game, but I'd miss it if it was absent. All the old faithfuls are there - unfortunately including Tingle as well, though his creepiness is almost surpassed by the new face and two mysterious hats of Chancellor Cole.

That's not to say that Spirit Tracks is a rehash for fans. Zelda at first acts like the slightly annoying princess you have to rescue (and screaming at rats really doesn't help), but she soon won me over with her comical dressed up in oversized armour and then getting hilariously chatted up by the enemy - 'You look cuter than usual, why?'

So maybe the franchise's warmth is as much about the humanity as it is about familiarity of the characters. I really liked how it allowed, and expected, Link's first response to the phantoms to be to run away. I can't say I blame him - the reason I got all the way to the final level of Phantom Hourglass and still haven't got round to picking it up again was because those phantoms just got scarier and scarier -- as well as not having the energy to face them all again in that final stupid speed run.

Or maybe, if I'm honest, part of the reason was that I have taken so long to finish Phantom Hourglass is that I enjoy its world too much, and I didn't want to have to leave. But with Spirit Tracks now in hand, I don't have to! It might be mostly more of the same, but the same is so good that you don't necessarily mind, especially when you don't have to spend all your time sailing around a vast ocean any more.

So here is my attempt to bring a little bit of the game back home into the real world with me, I thought it only fitting to celebrate our two legends of Hyrule in a stained glass-esque homage.

This diptych was the only way to go - and not just because the shrink plastic comes in tiny sheets, but to echo the dual screens of the DS and the thick black outlines echo the DS game's cell shading (that I love way more than the semi-realistic graphics of Twilight Princess).

Stained glass instantly reminds me of church and religion, but it's easy to see why they use it so much for Zelda artwork. Some myths really are worth believing in.

You can support Mary by buying Zelda Spirit Tracks