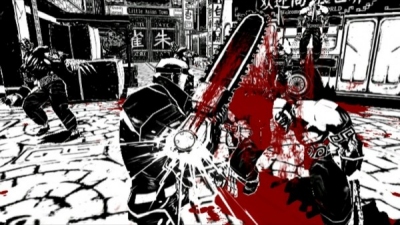 Here is my musical review of Madworld on the Wii, I've called it 'Madworld'. I'm performing it on the new BBC Four Vidoegame TV show Gameswipe with Charlie Brooker.

Get the Flash Player to see this player.

The Gameswipe show stars my original song, recorded at the BBC studios and airs on Tue 29 Sep at 22:00 on BBC Four.

Here at last a hardcore game on the wii that's nasty, stylized violence that we call comedy, like itchy and scratchy, like tom and jerry.
I just stabbed a guy through the eye with a road sign, pulled out his heart with my bare hands, do i feel alright?
No I feel dirty, there's really something quite unnerving about all the latent perving in the disturbing commentary.

You're trying way too hard, like a disillusioned nerd, who thinks chainsaws and swear words will make you the coolest kid in school

It's far too short and the weapons are far too few and I have to redo the whole level so i give you a headbutt with the nunchuk
I feel giddy, visually it gets really busy and my heart feels dizzy in this sadistic comic book

You're trying way too hard, like a disillusioned nerd, who thinks chainsaws and swear words will make you the coolest kid in school

You can support Rebecca by buying Madworld