Carcassonne Traders and Builders Board Game 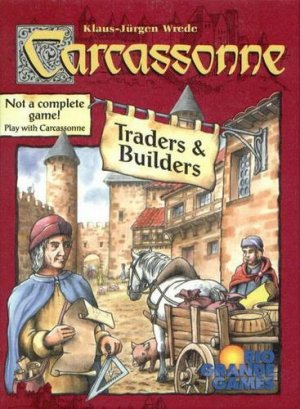 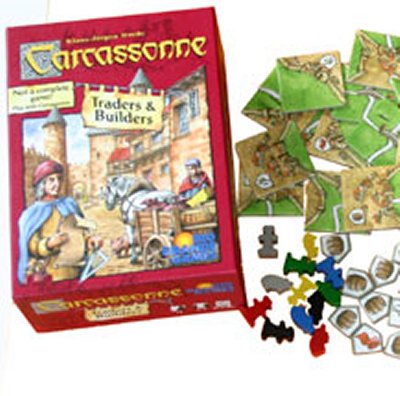 Carcassonne Traders and Builders lightly tweaks the balanced board game action of the basic game. A little complexity and a few new tactics arise as new options for attack and defence are realised.

Traders and Builders is an expansion for Carcassonne, a tile-based strategy board game for two to five players. Game play revolves around laying tiles and wooden people, a process whereby each player can only place there tile next to others with matching sides to slowly build fields, towns and roads.

The strategic element in Carcassonne is deciding where to lay your tiles - to help yourself or hinder opponents - as well as when and where to place your wooden men to score points. There is a balance between scoring points immediately and placing people to try and score points at the end of the game.

The main Carcassonne game is around GBP20 and usually comes with the rivers expansion as this has become a very common way to play the game and offers a better starting point - each player takes it in turn to lay a series of river tiles to generate a tributary around which the game can then be played.

As with other Carcassonne expansions, Traders and Builders sells for around GBP10. It adds a number of new tactical elements to the game, as well as providing a nice grab-bag for the tiles that makes drawing random pieces a lot easier. Traders and Builders adds new goods tiles for players to collect, a wooden pig piece that acts as a field multiplier, and a wooden builder piece that enables players to speed up city and road construction by granting additional turns.

As with the original game, Traders and Builders appears simple at first, but introduces some new tactics that take a few goes to really appreciate. The expansion builds on the basic rules of the game and requires little reading.

The new Trade tiles award the person who completes a city a commodity - ribbon, wheat and barrels. The player at the end of the game who has the most of one commodity is awarded additional points. Because these are collected by the person completing a city rather than the player who owns the city, it can make tactical sense to complete someone else's city to steal their commodity tiles.

The wooden builder piece can be added to a city or road you already own when you lay a tile that extends it. Once you have a city or road with a builder on it you get an extra go when you add a tile. This not only makes it more likely to get larger cities and roads but also adds a tactic for dealing with unwanted pieces. Where players share a city of road you can have multiple builders added that result in massive complex structures - and a really different look to the Carcassonne landscape.

The wooden pig piece can be laid on any field you own when you add a tile. This gives a player a points multiplier on the field score at the end of the game. Because this encourages you to commit to a certain field, it can intensify the battle for ownership as players fight to retain the areas that have placed their pigs.

The Traders and Builders expansion for Carcassonne increases the complexity and duration of the game. The additional rules and slightly more complex tiles take the game in a more tactical direction.

Although the tactics really require children of at least ten years old, the simple pattern matching of the tiles means than younger players can also enjoy joining in. Games do take a good forty five minutes to play that can be a challenge to young player's attention spans. You can control the duration by removing tiles from the game beforehand - provided a balanced deck remains.

Traders and Builders is one of the basic expansions for Carcassonne that takes a simple game and starts to make it highly involved. Those that have enjoyed the original will relish the new take on tactical game play offered by the commodity tiles as well as the builder and pig pieces.

You can support Ed by buying Carcassonne Traders and Builders