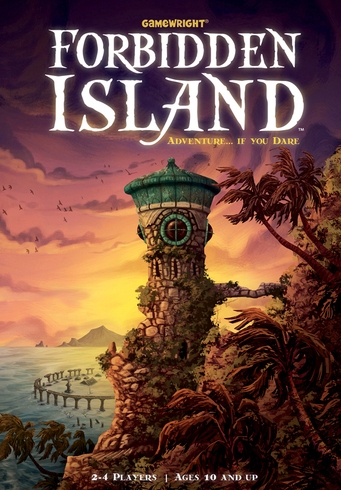 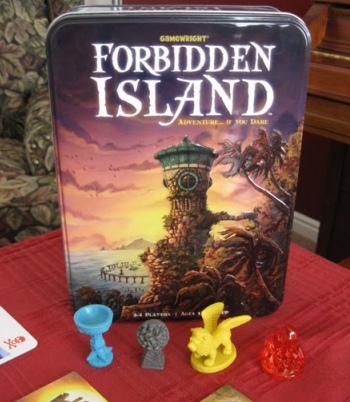 We're having a lot of fun with co-operative board game Forbidden Island at the moment. Simply put, it's the best family game we've ever played. Even our six year old can make a meaningful contribution and it holds her interest for the 30-40 minute duration, which is saying something believe me.

The basic premise of the game is to recover treasure from the island before it sinks into the sea. Being a co-op game, either everyone wins or everyone loses. Each player takes on a role with unique special abilities to contribute to the team: the Pilot can fly to any location once per turn, the Messenger can move other players on their turn, etc. Every game builds towards a close finish, exciting without being overly stressful.

The board comprises 24 locations tiles with evocative drawings and names such as Lost Lagoon, Breakers Bridge and Cliffs of Abandon (forever dubbed the Cliffs of Abingdon because we first played it in Oxfordshire.) During the game set up, the tiles are arranged in a diamond pattern in random order, meaning that the layout of the island will be different from game to game. Each of the four treasures can be claimed from one of two locations in exchange for four matching cards from the treasure deck. It's then a race back to the helicopter pad at Fools' Landing to be airlifted to safety.

Why the race? Well, the island has been booby trapped to sink should anyone be foolhardy enough to try to plunder its legendary treasures. The shuffled flood deck, one card for each location, determines the locations to be flooded.

The game starts with six tiles being flooded -- flipped to show a blue, muted picture of the location -- and two further tiles will be flooded each turn. Players spend up to three action points each turn to move around the board (even on flooded tiles and the Diver can swim through multiple adjacent flooded tiles), shore up flooded tiles (flip them back over), give a treasure card to another player on the same tile (the Messenger can give to any player) or claim a treasure.

It's the best family game we've ever played.

Two cards are drawn from the treasure deck each turn and sooner or later one of the dreaded 'Water Rise!' cards will turn up. Not only will now three tiles be flooded each turn (later four then five) but the recently-revealed flood cards be shuffled and placed on top of the floor draw pile. In other words, the chances are that one of the already-flooded tiles will flood again: when this happens the location sinks and the tile (and its card) are permanently removed from the game.

We started a game straight after Sunday breakfast, another first for us. We let the kids choose their roles, Diver for Aurora (9), because it's one of the jobs she wants to do when she grows up, and Pilot for Iona (9). Good choices: these roles tend to grab a larger share of the glory because they fetch treasures from otherwise-inaccessible locations. Mum and Dad played supporting roles of Engineer (shores up faster) and Messenger (passes treasure cards).

We ran a tight operation at the start, with no location staying flooded for long and two treasures in the bag quite early on. As usual, Iona played some surprisingly artful moves and ensured we kept within the rules, though there was a little silliness when she wanted to collect Fire Crystal cards when we'd already got that treasure.

The Earth Stone treasure was always going to be difficult though, both potential locations being as far away from Fool's Landing as is possible. We had no chance of maintaining a connecting route (dry or otherwise). So we formulated a risky plan: wait until we had a spare Air Lift card, passing Earth Stone cards to Iona in the meantime.

The non-swimming grownups just about managed to stumble to safety as the land crumbled beneath them.

Without a turn to spare, Iona used her Pilot's special ability to fly to the treasure location, claimed it then I air lifted her back to dry land. While the non-swimming grownups just about managed to stumble to safety as the land crumbled beneath them, Aurora the Diver had no problem reaching the water-surrounded Fools' Landing. I played my last special card to Air Lift us and our treasure off the island and to victory!

I think it was a combination of the physical nature of the game, and it's turn-based play style that made the kids much more comfortable with this than they were with Wii-Party. But at the same time, Forbidden Island has an almost videogame tension to it as you wrestle to manage the real estate and capture all the treasure. It's another reason while we are still very firmly a board gaming family.


You can support Ed by buying Forbidden Island