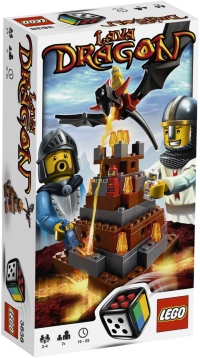 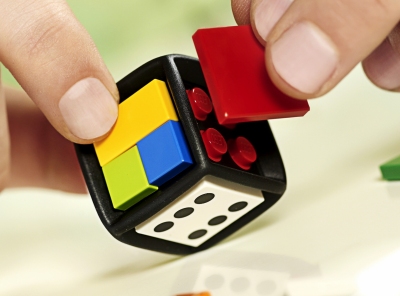 Lava Dragon is one of the new Lego games collection. These are board games that you build, play, and change. Lava Dragon comes complete with a Lego dice that shapes play as you go, and changeable rules. Lava Dragon is a new and interesting way of having fun with Lego along with family and friends.

It is difficult to classify Lava Dragon, but the game itself is essentially a dice throwing strategy game. However, players have the additional challenge of building the game 'board' from Lego first. In this case the playing area is a volcano, with players as knights trying to reach the top and summon the dragon from the top.

This is a stand alone game which is exceptionally good value at just GBP10. It is not expandable, but there are a whole series of these games available, which are different sizes and aimed at slightly different age ranges. All the games feature Lego's buildable die. Some are all out strategy games, whilst others take the action towards little racing challenges, and the biggest - Creationary - looks very similar to Pictionary except centred around building with Lego. The Lego Games are priced between GBP7 and GBP25.

The first time we opened the box, there was the excitement of opening all the little bags of Lego pieces, and then just like a Lego kit, we had to follow instructions to build the volcano.

Once the volcano was built we started playing. The instructions are very simple, and play is built up gradually as each player adds their own coloured 'movement' tiles to the side of the Lego die as they play. This is a brilliant concept, as it makes the game different every time.

Play continues clockwise, with each throw of the die determining which knights can move, or whether special actions can happen such as moving 'lava' tiles, or climbing up 'ropes' on the side of the volcano. These special moves can block the other knights, and this is where the strategy element of the game comes in. The first player to reach the top of the volcano and then roll an orange lava tile wins the game, by standing their knight on the lava dragon and flying off in victory.

In true Lego spirit, the game also encourage players to create new rules, a couple of which are suggested, but then it's up to you to make up more. If you find that your rules work, you are invited to upload them to the Lego Games web site, where you can also find other invented rules.

After you've played the game, you do need to take the 'board' apart in order to get it back into the box, but we left it in a couple of smaller pieces for easy re-assembly. If you really like building with Lego you could take it totally to pieces each time and re-build it the next time!

We've found we can have very short rounds of this game - sometimes only 15 minutes! However, after a short game we usually play again and games have lasted up to half an hour. This is because the die turns out differently every time, which can affect the gameplay significantly.

A Lego Game like this is a brilliant idea. You have all the fun of building something, and then you can actually use it to play a game with friends and family. The game itself is simple, yet has an element of strategy involved which keeps it exciting. Add this to the changeable die which does make the game turn out differently each time and what you have is simply a winning combination. I highly recommend this game, and probably the whole series, for Lego loving families, particularly those with children in the 5-10 age range. We can't wait to play another one!

You can support Ed by buying Lego Games Lava Dragon