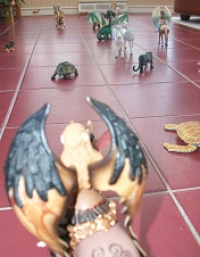 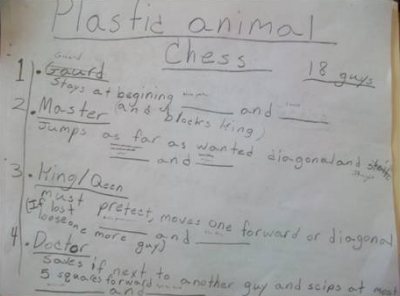 Plastic Animal Chess has become something of an Internet meme in the few days since its invention by an eight year old. Here are the rules so you can try it for yourself.

Mark Changizi's eight-year-old daughter's response to him teaching her chess was to reinvent it from the ground up. The next day she presented him with the rules for her new improved version of the classic game.

The new variant, described across the four hand-written pages had ten different types of pieces and 18 in total. This was far more complex than the original game.

The next minute they were laying out plastic animals for each piece on the checkered tile floor and working out their strategies for the game. There was a Doctor who grants invulnerability to any adjacent piece; a Replacer that when landed on enables the player to swap any two pieces with their opponent and even a Civilian who has no power but obstruct movement.

Having told the game's story on Wired, I wanted to present the rules to Changizi's chess variant for everyone to play.

Give it a go and let us know how you get on.

You can support Ed by buying Plastic Animal Chess Rules