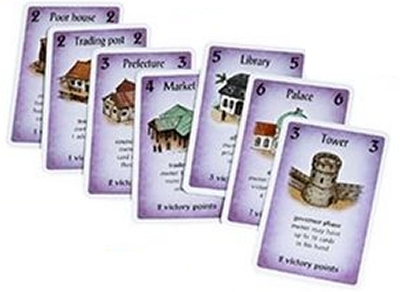 San Juan is a card based derivative of the board game Puerto Rico. While not strictly a board game as it has no board, it's a turn based game in which you need a fair bit of table space to build your empire. Knowledge of the game and strategy is key, although there is some luck involved too.

San Juan is the little brother to the popular board game Puerto Rico. It was created in order to shorten the original game, so many elements of Puerto Rico have been simplified to achieve this, and you definitely don't need to have played the original game in order to enjoy this one. The two games are similar in style, but San Juan has no board and is played entirely with cards which are laid out on the table in order to build your town, produce goods, trade, and eventually win by earning enough points.

There are no expansions for San Juan, and it is cheap when compared to other similar games, with a price tag of around GBP20. It has a attractive compact box and is easily portable. However, it is limited to being playable by four players.

San Juan is a game that requires little setup. Each player is given one building with which to start their town, and four cards to work with in the first place. There are cards which sit in the middle of the table and these provide the structure to the game.

Game play is determined in rounds where one player is the Governor. During each round, each player chooses an action that each player follows in turn. This is fairly complex but you do get used to it, and it makes perfect sense after a couple of rounds!

Cards are used to pay for building, and as you lay each card down, the actions you can take are also changed by the instructions on the cards, or the special functions of each building. Again, this is fairly involved, and the first time you play you might struggle, but as you get to know the cards in the game, it becomes much more fun to plan your town and try different strategies. It does mean that each person's turn can be completely different from that of the player sitting next to them, so there is a fair bit of trust involved as players keep track of their own actions.

The game ends when one player has built 12 buildings in their town - so unfortunately you can't spend too much time planning your strategy as otherwise the players who work on building quickly may beat you while you are trying to take care over your buildings - this happens regularly in our household! The building action is completed by each player, and then points are added up to determine who is the winner.

San Juan is definitely a game for older children, as it is so involved, probably ten years and upwards. Strategic planning helps win the game, as it's not always the person who builds the biggest town, or who finishes first, who wins!

A game usually takes around an hour, perhaps a little more if you are explaining things to players along the way. Most people we've explained it to have definitely enjoyed the experience and wanted to play again afterwards!

This is a game which our family has really enjoyed. We felt lost the first time we played it, but we could see that it would be well loved so we invested time in playing it a few more times, and now that we all know what we're doing, it's one of our favourites - and is the most likely candidate for coming on holiday with us because it's small and light! It is definitely a game that rewards those who take the time to learn its intricacies.

You can support Ed by buying San Juan