Settlers of Catan Board Games Review

Settlers of Catan Board Game 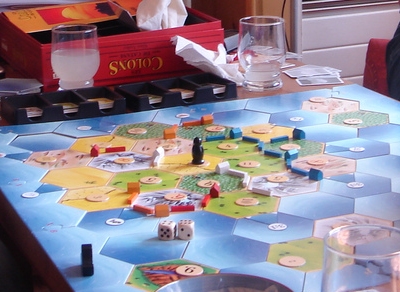 Settlers of Catan is a strategy game where players compete to build the biggest and best settlements using a combination of strategy and luck. Due to a modular board and dice-directed play, the game is differently every time you play.

Settlers of Catan is a well established strategy game with a number of different variations available. It revolves around simple resource management and has a board that is constructed afresh for each time you play it. I was introduced to Settlers by some friends, and immediately had to buy a set, as I enjoyed it so much and could see that my family would love it too.

The basic Settlers box costs around GBP49.99, but if, like me, you want to play with more than four people, you will also want the six player expansion pack, for a further GFBP14.99. This makes the game seem quite expensive but I think it is well worth it.

As well as the original Settlers of Catan, you can buy the Seafarers, Cities and Knights, and Traders and Barbarians extensions to the game, which add extra dimensions. There are rule variations for playing with larger groups of people and these are clearly explained in the extension packs.

Game set-up can take a while until you get used to it. The board is built up of hexagonal pieces which join together like a jigsaw, and while there’s a suggested set-up for these, you can in fact play with them in any configuration you like.

Unlike a videogame you need to read the rules before playing, and there are a lot of them. This can seem a bit overwhelming at first, but once you’ve played a couple of times the game play is actually quite simple. It also comes with a great Almanac describing all the complexities clearly.

Settlers of Catan combines strategy and resource management. You need the right materials to build houses and roads and gain victory points. The luck of the dice throw drives these resources and determines how many settlements and roads you can build, which in turn determines your accrual of further resources. These can then be used to purchase other materials or special cards which develop your settlement.

The gameplay is enhanced by the way that on your turn, if you don't have the resources you need in order to do what you need to do, you can barter with other players, offer card exchanges, and haggle about what you need in order to make the game work for you. This particular facet of the game means that it often takes ages to get through a turn in my family! One of my kids will never deal with other people, while another one of them will take ages bargaining for resources in order to get the cards that they need.

I particularly like the little wooden pieces in Settlers of Catan - there are three sorts: roads, settlements and cities. The last time that I played the game, as well as the game itself I ended up having lots of entertainment from sculptures made with the game pieces, but I suspect that was largely due to the drinks we enjoyed at the same time.

The outcome of the game is decided by 'Victory Points'. These can be earned through the development cards that you buy, having the longest road, the biggest army, or the most cities in your settlement. As there are so many different ways to gain Victory Points, each player does have a lot of tactical decisions to make.

The game can take a good few hours to play if you have some determined players not willing to trade freely. As it is a fairly complex game in many ways, the age recommendation of 8+ is a good guide, and there is a separate 'Kids of Catan' set available for younger players.

Settlers of Catan is unique, unlike any other board game I had played before. It has remained a firm favourite both with my kids as well as after dinner entertainment. It's less prescriptive than Monopoly, and less cut-throat than Risk - and more interesting than both of them. The real strength is in the way the board and dice work together to make the game different every time. If you still want more, you can play online at www.catan.com, or even on your iPhone!

You can support Ed by buying Settlers of Catan