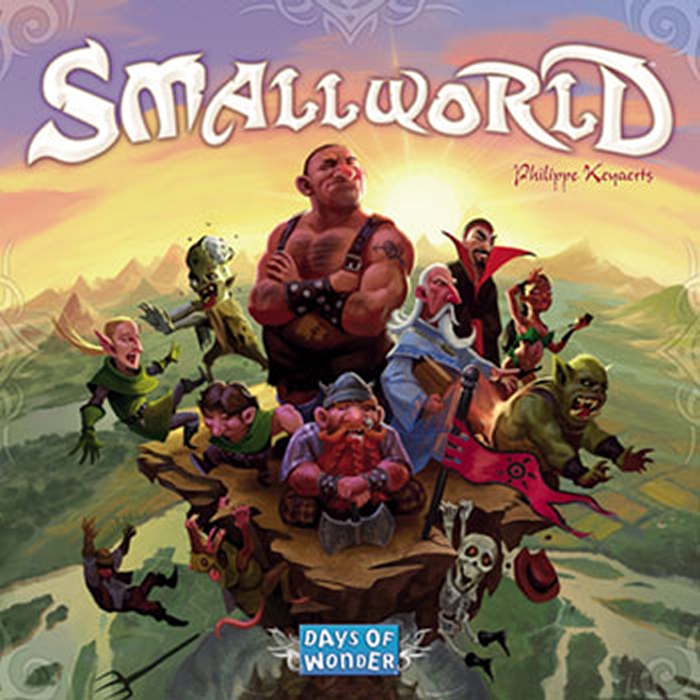 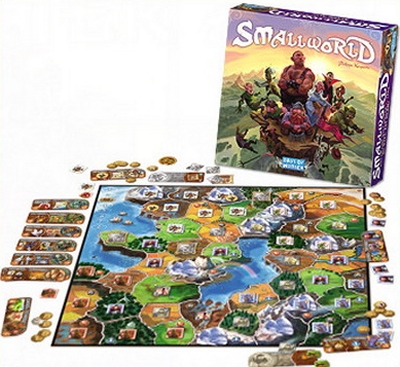 Small World is a civilization building board game where you race to inhabit territories, choosing different fantasy races and various special powers to build their empires. With countless different combinations of races and powers this game stays fresh and fun each time you play.

Small World is a colony building game - somewhat similar to Risk but much simpler and much prettier! You control a race of people instead of an army - so while it is a military style game there's no fighting or battling involved. Unlike other empire-building games we've played before, you won't be able to win the game with only one race, instead you need to choose two, three, or even four - and the skill of the game is in knowing when one race has done as much as it can and the player should start playing with another race and power combination. The game looks beautiful; the board itself, and the illustrations and designs on the playing pieces are really appealing.

The basic board game set costs around GBP35, and this contains all you need to play the main game, as you would expect. There are three expansion packs available, at a cost of around GBP9 each: Cursed, Grand Dames, and Leaders of Small World. These contain extra races, and special powers, and the final one (Leaders) adds an extra facet to play as each race now has a Leader.

The first time we opened Small World I was amazed at how many pop out pieces there were! In fact, our first session was just popping out the playing tokens, organising them, and reading the instructions - we clearly didn't have enough time to play the whole game there and then.

The game box itself is very well designed. The instructions even tell you to keep the outside edges of the cut out pieces to prop up the box inner, so that when the game is closed the pieces don't fly around everywhere inside the box. Also, there is also a clear diagram of where all the tokens go, so that you can easily fit them all in to the storage box.

Having sorted out all the game pieces, when we actually came to start playing, the instructions were clear and we were able to get on quickly. There are two boards, a smaller one and a bigger one, which are used according to how many players are taking part. Each player has a reference card which is very useful as there is a lot of information to take in at first. The reference card outlines what actions happen during a player's turn, and on the reverse there are brief explanations of all the various races and special powers.

During your turn, you first choose a race and special power to play with. There are always six combinations available to choose from, at different costs. After that, you use your race tokens to conquer sections of the map. These conquests aren't dice based, although a die does come into play during your last conquest in order to give you reinforcements. Instead you take territories simply by placing an appropriate number of your race tokens in that part of the land, according to whether there are other races that need attacking, or other defenses that need to be overcome. Points (coins) are scored for territories occupied at the end of each player's turn, and troops (tokens) can be redistributed between the territories. Alternatively, as long as you leave one of your race tokens on your territory, the rest can be taken back to play with during the next turn.

Play continues, and each player must determine when their race has taken as much of the land as possible. At that point, they can opt to choose a new race and power combination, and the original race goes into decline. While in decline, that race still occupies territories which count towards that player's points each turn.

The game is counted in rounds, and ends after the turn marker reaches its final space on the board. All players have a chance to play a final turn, and then the coins are added up; the player with the highest score wins.

The game can take quite a while to play - the guide on the box says 40 - 80 minutes. Our family have never managed to complete a game in under an hour though! The game is playable by 2 - 5 people, and again the box gives a guide of age 8 and above. I think this is about right; the game is simple enough to learn but a lot of the explanations are quite wordy, so it helps if children are able to read and understand the descriptions of all the races and special powers for themselves.

The simplicity of the conquests in this game made it quick to take territory, and we thought that the races and special powers were well designed. The children liked the characteristics of the races, and we all enjoyed being able to play with a few different races during a game - it meant that if you realised you've chosen characters that couldn't make much headway, you could simply put that race into decline and start afresh with another one. I particularly like games that somehow build in an element of 'different every time', and this game achieves this by the race/special power combinations, so for me, it's a winner. It does take a while to learn the gameplay, but once you've mastered this, it is a very satisfying, lighthearted, and fun game to play.

You can support Ed by buying Small World