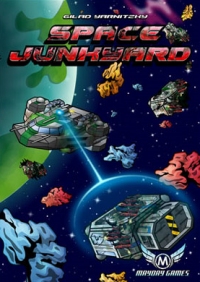 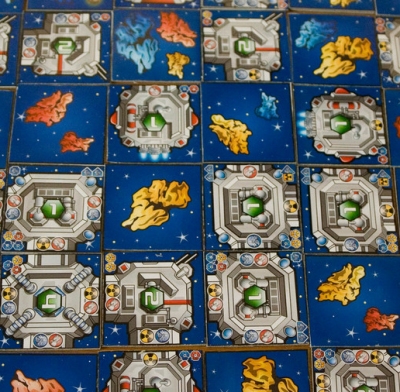 Space Junkyard like its topic is a little messy and complex. Given a bit of time though and a spatial puzzle board game emerges that will keep your grey matter ticking over for some time.

All family members were present for the ceremonial opening of the box from Board Game Extras. "Looks dark and blue, a bit boyish," mused Clare and immediately counted herself out of the first game.

Iona, youngest daughter, liked the plastic spaceships and immediately started driving them around the playing area map, a 6x6 grid representing an area of space. But there's a lot going on in a single turn in Space Junkyard, probably too much to hold a six-year-old's interest for long.

Charlotte, just short of the minimum suggested age of 10, had no problem grasping the game play, helped no doubt by her broad experience of board games. She was certainly keen, declaring the theme, 'Very cool'. She liked the idea of recycling junk and creating her own spacestation from salvaged parts. She had fun punching out the tiles while I got to grips with six short pages of rules.

Our two player game, using a 5x5 board and a reduced number of tiles, got off to a slower than expected start. Players fly their spaceship across the board and pick up tiles. A spaceship section tile can either be recycled to gain resources or attached to the player's spacestation by spending resources.

An asteroid tile is always exchanged for resources and a player can choose to pick two such tiles in a single turn. A player ends their turn by adding a new tile to one edge of the board and pushing the end tile off into deep space and out of the game, which has the effect of mixing up the board and adds nicely to the theme of junk floating around in space.

Our two player game, using a 5x5 board and a reduced number of tiles, got off to a slower than expected start.

The spaceship tiles are quite 'busy' in design. The recycle value shows the number of resources for which the tile may be exchanged should the player choose not to attach it to their spacestation. A few tiles have the ability to produce a single resource at the start of the holding player's turn. Most tiles can be used to store resources, indicated by symbols in the corresponding colour. In order to connect a tile to a player's spacestation their nodes must line up and the indicated resources must be paid immediately from the spacestation's storage. Finally, each tile has a point value between zero and four that is scored at the end of the game.

In the early part of the game we both sought out the sections with storage facilities. Charlotte was very careful about the sections she attached to her ship, leaving few unconnected nodes (which count for minus points at the end) and particularly coveted the resource-producing sections. I decided to try a "quantity over quality" strategy, figuring that a large spacestation would still score big even with many open nodes.

Although we quickly found our different strategies, throughout the game we had problems seeing the optimal moves. When picking tiles to maximise the amount resource to acquire, a bit of number crunching was involved: pick asteroids or recycle a spaceship part and do I have the capacity to store it? Happily, we happen to like spatial logic puzzles (such as Nurikabe from the Sudoku family) so this was all part of the fun for us.

When picking a section with the intention of attaching it our spacestation, we'd often find we didn't have the correct combination of resources required to complete the move. We quickly came up with a house rule to the effect that tiles could be replaced and the turn replayed. Although a turn could involve many undo and redo operations, this seemed better than forcing an opponent to recycle a tile they couldn't build. And, as usual, we took a "don't be evil" approach, an unspoken agreement not to grab tiles we know the other player needs.

We both agreed that we had thoroughly enjoyed the two hours of play and that a draw was a good result.

The game ends when the supply of tiles has run out. Although we were playing with a reduced number of tiles, as per the two player rules, the second half of the game dragged on a little, partly because the worthwhile tiles on the board become scarce. Charlotte absolutely loved the routine of actions required by a single turn: produce resource, store resource, pick tile, maybe connect a section spend resources, then "pushy, pushy" a new tile into space. This same routine became a little monotonous from a grownup's perspective but there is enough going on to maintain interest levels.

The point value of Charlotte's spacestation totalled 15 with only two unconnected nodes, giving a final score of 13. My spacestation totalled 20 but the numerous open nodes reduced my final score also to 13. We both agreed that we had thoroughly enjoyed the two hours of play and that a draw was a good result. I'm sure Charlotte and I will play this one again because of our shared interest in spatial puzzles, though I'm not sure it will appeal to the other members of our family.

You can support Ed by buying Space Junkyard