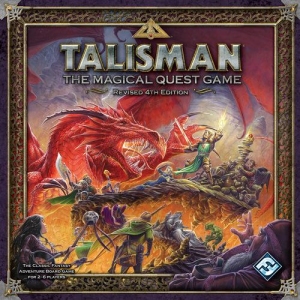 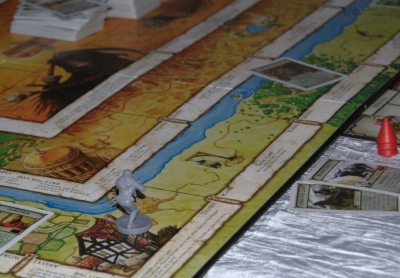 Talisman creates a varied role playing experience around a boardgame - character development, loot, equipment, spells, dice and cards combine to make this accessible and authentic. The complexity of the game is worth it but you do need children 10 or older and a lot of free time to play.

The Talisman series of games were originally created by Games Workshop, and are role playing adventure games. The board provides the fantasy setting, divided into three regions, which players work through by a series of dice throws and card draws which shape their game.

Like in a traditional Role Play Game, players slowly build their characters' powers through both card and dice based play, eventually gaining enough strength to move into the centre of the game board and win the game.

Talisman is now in its fourth edition, having been first released in 1983. The game is playable by up to 6 people, so you really don't need an expansion kit. However, there are expansions available: The Reaper, The Dungeon, and The Frostmarch. These expansions add different characters, adventure cards, and spell cards to the game, as well as alternative quests.

We were excited when we received our Talisman set - it looks beautiful, the artwork is gorgeous, and entices you into its fantasy world immediately. Setup was relatively straightforward although it did take us a long time to wade through the lengthy rule book, and work out how to begin. In fact, our first attempt was a total false start as we realised we'd been playing the game incorrectly so we had to re-try the next day!

If you are playing this with family and friends, it certainly warrants some test plays before hand - or an evening spent reading through and figuring out the rules.

Talisman gameplay is fairly complex and will sound complicated below. But as long as you are up for a slightly geeky challenge, you should enjoy getting to know how it all works. The rules have obviously all been thought through in detail and work to create a real sense of role playing an adventure.

Each player has a character with various special abilities. Dice rolls determine where you land on the board, which in turn determines how your quest unfolds. As you move around the board, adventure cards are turned up that give opportunity to build your character's strength and craft.

You have a certain amount of lives at the beginning of the game, these can be both lost and gained as you play. You also receive a number of fate tokens that can be played to try and change the outcome of a certain scenario. Your character can be equipped with useful objects that again improve their abilities, as well as the talisman itself which you must earn before you can win the game. You can also collect and cast spells as the game progresses. Battles are played out through a series of dice rolls, as are encounters triggered at certain places on the board.

As well as all this, you can determine whether your character is good, neutral, or evil with the alignment cards. This alignment affects how your character responds to various adventure cards. You can also earn money which can be used to help you in different ways.

Alongside these various decisions, the game is quite dependent on luck and at times you have little control over their encounters - which can get annoying at times. However, with a large choice of characters and the wide variety of adventure cards available, Talisman truly is different every time, which is a real strength.

Talisman's box gives a guide of 90 minutes for a game, with an age range of 10+ . I definitely endorse the age guide, not least because even if the average 10 year old can understand how to play the game, they really will need to be able to keep concentrating for a long time! But you will need at least two hours to play it if you are playing with any more than two people.

Playing with a family, the game could easily go on for three hours or more. In fact, my children haven't made it to the end of a game yet as games always seem to go on and on until bedtime and beyond, with no-one earning the strength they need to complete their adventure, which is quite frustrating.

Talisman is an interesting and involving game, but I found it simply took too long for our family to play. We all loved the look of the game, the concept, characters, and even the complex gameplay, but in practice it took too long for any of our characters to gain the powers they needed to make progress. Each character is unique and therefore their adventures play out differently, so it's even impossible to set a time limit and decide who has won at a certain point - as you can if you get bored in a long game of Monopoly! As a result, I think this is a fabulous game for fantasy adventure role playing lovers, but not for an average family, unless you have a lot of time to spare.

You can support Ed by buying Talisman