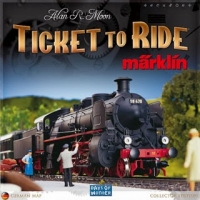 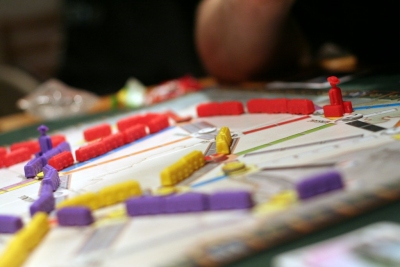 Ticket to Ride Märklin Edition is a very handsome game. The game board is gorgeous, showing a colourful antique map of Germany. The playing cards are of a high quality and each shows a unique picture of a model train car.

At the start of the game each player receives a supply of 45 model train counters (Märklin being the German equivalent of England's Hornby), three passenger counters, four tickets (must keep at least two) and four train cards. During the game, players will collect sets of train cards, connect routes, position then move passengers to collect merchandise and perhaps acquire further tickets. In addition to points scored during the game for routes and merchandise, players are rewarded at the end for connected destinations on the tickets they hold.

To complete a route, the player surrenders an appropriate set of train cards, places the required number of train counters on the board to connect the two destinations and immediately scores points for the route. The longer the route the more points are scored with the longer routes being very valuable. For example, a three-train route is worth four points, a four-train route scores seven points and a seven-train route scores a whopping 18 points.

Players will aim to complete continuous routes in order to connect the destinations on the tickets they hold, which are worth between five and 22 points in the final tally. A route claimed by one player cannot be used by another. Although some of the main lines have double (or even triple) routes, players will often have to make detours using less direct connections. The key to success is building an efficient network of routes on the board, then drawing further tickets that can be connected with minimal extension to your network (because you have to keep at least one of the four new tickets drawn you occasionally will get stuck with a dud).

The first game we played was a two-player - just the grownups. I observed the shorter routes seemed to be on the West portion of the map and naturally pointed this out. Ticket to Ride Märklin accommodates 'friendly' play quite well which is how we like it.

The game progressed well although it did feel a bit like solitaire.

Although opponent's tickets are not revealed until the end of the game, it is often possible to deduce the general direction in which the another player is going. Playing 'nice' means we only grab a connection if we need it to complete one of our tickets. In other words, if your are going to deliberately block me then you'd better have a ticket for that route at the game's end or there'll be trouble.

I did wonder to myself whether there'd be a lot of contention for routes on that West side but my fears were unfounded. Our respective networks hardly touched. The game progressed well although it did feel a bit like solitaire.

We couldn't get a handle on how to play the passengers. I opted to play them as soon as possible and wait for my network to become established. Rosie chose to keep hers back until she'd figured out the optimum position. In truth she'd forgotten to play them earlier and didn't manage to get the last one into play at all, not that it mattered in the end.

The end-game is triggered when a player is reduced to two train counters or fewer, at which point all players have one last turn. Obviously, it is a good idea to keep an eye on your opponents' supplies. In the spirit of 'friendly' play, if one player was on the verge of 'going out' they would drop a hint to a player that starting new tickets might not be a good idea.

Generally, we were very impressed by Ticket to Ride Märklin.

Perhaps the presence of many long routes on the board caused me to lose track of Rosie's progress because the game's end sneaked up on me. I had to use my last turn to move my remaining passenger along a sub-optimal route in a last bid attempt to boost my score. I was left with (oh, the shame) incomplete tickets, in which circumstances the point value of each is deducted from one's final score.

Rosie won by a large margin and I was left wondering quite where I'd gone wrong. She pointed out it was probably just The Curse - I have never won a board game on its debut outing.

Generally, we were very impressed by Ticket to Ride Märklin. Although we weren't particularly fond of the passengers element -- it seemed to interrupt the flow of the game -- and will probably omit them next time.

You can support Ed by buying Ticket to Ride Marklin Edition