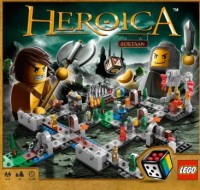 Other GamePeople columnists have reviewed this from their perspective - huh?:
Reporting Gamer (LEGO) 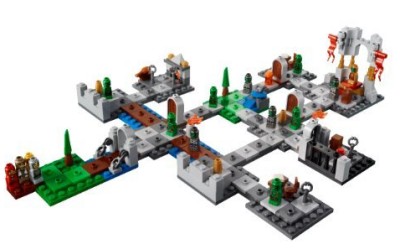 Heroica invites you to quest through deserts, forests, caves and castles in search of treasure, with Lego's most detailed board game yet. Best described as an introduction to role-playing games, Heroica has all the fun of Lego and adventuring without the complex rules that often seem daunting.

Straight out of the box, it is a very accessible board game, so if I've given you any worries about this being a complicated as Dungeons and Dragons, please feel free to cast these aside.

Heroica is a measured race through a non-linear board, with optional items to collect and occasional obstacles to overcome. Some of these obstacles are unique to each kit, such as locked doors requiring keys or fallen rocks which can be overcome with a dice roll.

To prove the simplicity of Heroica, we enlisted the help of my five-year-old nephew. He's very excited about castles and knights at the moment and he was thrilled to play a game searching for treasure in caves and dungeons and the like. It captured his imagination perfectly and he loved the idea of battle with the goblins and bats that inhabit the board. Combat is solved with a very simple roll or two, made more exciting by each player's piece having a different special ability.

I found that my nephew couldn't fully appreciate the different characters' special abilities, such as defeating monsters at distance or allowing health to be recovered. Also, he didn't quite grasp the risk/reward nature of a non-linear board game, with side rooms full of items that can aid, but can also provide a distraction. To be fair, the game is recommended for eight and up, but nevertheless I would say that even in a couple of months he'll be more than suited to the higher level strategising this game requires. If anything, playing this game might help with that itself.

For the imaginative player, Heroica represents a massive wealth of opportunity.

There are four different Heroica kits which can each be played as stand-alone games or joined together to form even bigger locations. Castle Fortaan is the largest, for two to four players. Waldurk Forest and Caverns of Nathuz are medium sized games for two to three players and Draida Bay is the smallest, for only two players. From what I've experienced, I suspect that Draida Bay would be too small and simplistic to provide much entertainment on its own, but it would be a perfect accompaniment to expand any of the other kits quite cheaply.

I have to salute the design of Heroica as a Lego kit alone. The board locations are wonderfully expressive, made as they are out of such simple pieces. Here there is a writing desk with a piece of paper, there a kitchen fireplace or even a waterfall. These models are perfect at expressing a setting and driving imagination, which is what a game like this should inspire. Once finished, the board can be stored in the box with the rooms intact, so it does not need to be rebuilt from scratch each time you want to play the game.

There is plenty of room for Heroica to be expanded by older and more experienced players. The basic rules provide an entertaining journey and joining kits together already gives rise to good replay value. Additionally, the instructions even encourage players to experiment with a rules - a little at a time - and even come up with stories to narrate the adventures taking place on the board. Between us we even made a few simple changes which really enhanced our experience.

Here there is a writing desk with a piece of paper, there a kitchen fireplace or even a waterfall.

I started by saying that Heroica shouldn't be daunting to those who fear complex tabletop roleplaying. It isn't, but the brilliance of this game Heroica is that there is so much potential to support more complex rules and more of the roleplaying experience. It can grow as its players grow and provide a framework for many years and adventures to come.

Overall I'm surprised that I haven't seen the Heroica in more stores alongside other Lego kits because it's well worth searching for. As a model set it's a great fun build and as a board game it's fantastically entertaining. In fact Heroica is such an inspired idea it's almost a wonder that Lego haven't given us this particular treasure before. With such room for expansion and imagination, I hope that Heroica is one day seen as a landmark in the way that Lego continues to be enjoyed by older players - and their parents.

You can support Ed by buying Heroica