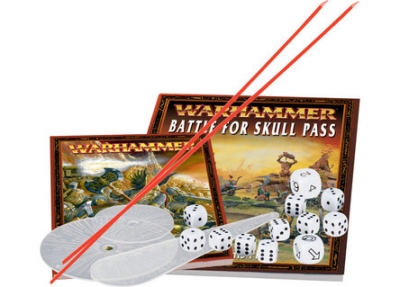 Warhammer is a tabletop battle game made by Games Workshop. Rather than its sci-fi sister Warhammer 40k, Warhammer is filled with magic and medieval references. Players gather around a table and use miniature lead figures in epic battles, determined by measured movement and dice rolls. Dwarves, elves, orcs, goblins and men create a battle reminiscent of Tolkien's classic saga.

Warhammer was first released in 1983. Since then the game has developed both in terms of its models and rules. It is currently on the 7th edition of the rules that delivers a game full of excitement and pressures of battlefield tactics.

It is a table top battle game, played with miniature lead figures. Each player takes turns in a a turn based system where each go moves through movement and attack phases. Measures determine movement and projectile range, while encounters are decided by the roll of different sided die - depending on the combatants.

The cheapest way to get started is to buy the Battle for Skull Pass hobby set. There is enough to get two people started playing. In fact this offers better value than the 40k counterpart as it contains more models and a small painting set to get you started. Also contained are: a small bag of dice, measuring sticks, a small rule book and over 100 miniatures.

The two armies in the box are Dwarfs and Goblins, that will get you started with general gameplay and tactics. Once you have chosen a favourite you can always expand your army buy purchasing some more kits. Larger pieces are available, such as a gyrocopter for a Dwarf army costing 18GBP or the ever popular giant model for 25GBP.

To properly paint your figures you may want to obtain more paints through with the 12 pot Hobby Set or individual pots for 2.25GBP. With over 80 colours available you can personalise your army with whatever colours you decide.

Opening the Starter set is an exciting endeavour, particularly as you explore all of the models and take in their detail. If you've played 40k the models here may seem a little more intimidating as they are a fair amount smaller, and consequently harder to paint. To balance this however the models are simpler to put together as they have fewer parts.

Once you've constructed and pained your army - something that can take as little as an hour or as long as a few weeks - it's time to browse the rule book and get to know the rules. Warhammer is a more complex game than its futuristic cousin as there are more intricacies in both play style and resulting tactics. It's accepted that you will make many mistakes in your first game, in fact when I first played it took twice as long as it should from checking the rules at every turn.

So your models are built, the rules have been read, now it's time to set up your table and grab a friend. Games are played on a tabletop decorated with scenery and models you make yourself or purchase pre-decorated from Games Workshop. Any good models of the right scale will serve purpose here - and any Model Railway enthusiast will find this familiar territory.

Warhammer armies need to be organised before starting a war, you need to create an 'army list'. This is done by identify the points for each model with your race's Army Book. The aim is to add them up to a decided amount and create two fair sides. Most games are played with 2000 point armies but the starter set will only allow for around 600-800 point sides. Don't worry if the set up of the game takes some time, once you start playing it's all worthwhile.

Turns are broken down into phases: movement, magic and assault. Movement is limited to certain amounts of inches and this is dictated in your army book, magic spells are cast and/or dispelled in the second phase and your turn is finished by charging into enemies and finishing them off in hand to hand combat.

The movement and fighting is quite complex and required knowing, or looking up, the rank and file system. This confused me greatly when I first played as only certain ranks can attack at a time and they can receive bonuses to combat if they flank or charge. This is where many players can stumble as it's all very confusing, the best thing to do is sit down with your friend and make sure you both understand as best as you can. After all, you're playing for fun and a few mistakes cannot break the enjoyment.

The result of fighting or taking damage is determined by rolling handfuls of dice and checking the result to the totals in the rule book. This may appear that it is largely based on luck, but the strategy that proceeds each encounter ensures the game also relies on the skill of the player. Movement of your troops is as important as how you cast magic or attack as you want to make sure you can deal the most damage from your position or defend incoming spells or arrows.

Learning the game is tough, one of my first games was against a friend of mine who has been playing for years. He managed to thump my Dwarfs into a messy pulp and left nothing but four measly archers being chased around the battlefield. It was my own fault for not planning my attack, but despite the loss I still enjoyed the game thoroughly. I loved the moment I flew my gyrocopter too close to an enchanted tree that swiftly formed a fist and punched it out of the air. Yes it was destroyed, but it was certainly a highlight of the game.

I found it took several games to become confident enough to play without a rule book stuck to my hand, Warhammer is far more complicated than 40k and if you are looking to take up either hobby you may find the learning more easy going with 40k.

Battles in Warhammer can vary in time. The starter set will allow smaller games of around an hour but once you've added to your army some games can last over six hours if you feel so inclined.

Games Workshop state that many children can learn to play the game easily, but there is a lot of mathematics and lateral thinking involved. The hobby of collecting an army is the most appealing aspect to children as each model needs painting and this can be a great way for parents and children to spend time together.

It is worth keeping in mind that there are far more rules here than in other games and I've found that Warhammer is better for children over the age of 12, due to its complexities. 40k is less rigid in it's use of army formations and tactics and may offer an easier starting point.

Warhammer is an enjoyable game that is surrounded by a wonderfully deep fantasy setting that anyone can relate to. Although it is a tough game to learn, it can be incredibly rewarding once you know it inside and out. The beauty of it is that it's not just about fighting it out with friends, but about the creativity too. Building your model kits and painting them is a great way to spend time and have something productive to show for it.

You are the general of an army of your choosing, from noble humans to six foot tall rats. The army itself is made from plastic and metal pieces and must be built by your own hand, which adds a creative and personal dynamic to the game. The battles themselves are played on a tabletop, usually 6x4ft and the damage and spells are cast by rolling dice. The similarities between this and 40k are plenty, but the main distinctions between the two are the medieval fantasy setting of Warhammer and the traditional rank and file layouts of armies.

You can support Ed by buying Warhammer Battle for Skull Pass