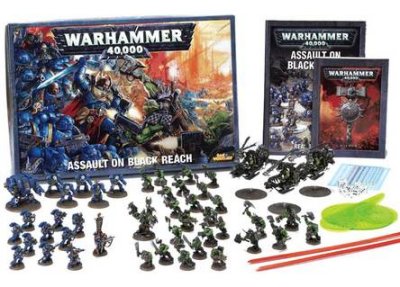 Warhammer 40k is a tabletop war game revolving around Games Workshop's sci-fi fiction and lead figures. Two or more players can gather around a table and create a battle filled with tactics and drama, using miniature armies made from plastic and metal. Although at first the game can be a little confusing, players from the age of eight should have no problem learning the ropes.

Warhammer 40k is a turn based strategy game that was created by Games Workshop in 1988 and continues to evolve. The game is set in the 41st century and sees players taking up the mantle of a general to their own miniature army. There are several types of army that can be used, some based on humans and others on bizarre alien races.

The game is played with a rule book, dice, and tape measure. Die rolls are used to discover whether your shots have hit their target, or how much damage you may have caused to your enemy. Movement and range is measurement based, rather than marked out, players use a measure to determine a valid movement or shot distance.

Warhammer 40k is also unusual because the games components are made by the players themselves. Models must be built from official plastic or metal kits but are then customised and painted. The battlefield itself is also decorated with homemade scenery laid out before the game starts.

There are several ways to play 40k but the ultimate goal is to defeat your opponent by destroying their army or capturing strategic points on the table.

40k is now in its fifth edition, which means that the game is currently played with the fifth version of the rule book. There have been several expansions over time but each of them is much more complex than starting up the hobby and they're designed for veterans to use more of their models and create bigger and deeper battles.

The cheapest way to get started is to buy the GBP50 Assault on Black Reach starter set. Contains everything you need to start playing - miniatures from two armies, Space Marines and Orcs and a handful of dice, measuring sticks and a small rule book. This is perfect for the starter but there are a few other kits to pick up and expand your new hobby.

The miniatures come unpainted so it's worth picking up the hobby starter set for GBP30, this set contains nine paints, a paintbrush, plastic cutters, glue and materials to make the base of your models look like grass. It may seem costly but painting the models is a worthwhile hobby and adds an extra touch of personalisation.

There's plenty to add to either of the armies including in Black Reach if you choose to, many squads can be added for around GBP18 per box which will bag you around 12 or so models, you can also bolster your troops with a tank or two; these are on the more expensive side at GBP35 but you do get a large model to build and an impressive front line to scare your opponent.

Upon opening the Assault on Black Reach starter set I felt a little daunted. Staring up at me are bags of dice, measurement sticks, green templates and plenty of plastic components. Looking over each spruce of plastic parts is awe inspiring though, seeing the great detail that games Workshop has put into their creation and how futuristic it all is.

You get a cut down version of the rule book in the set, but this still contains much of the detail and is easily adequate to get you started. Before you can start playing you need to do some building and have a good read of the rules. This means you also need to get hold of some plastic glue and clippers.

Once everything is glued together and everyone is ready to play the first game is quite slow as there's plenty to learn and mistakes are be made easily. Taking things slowly though meant I soon adjusted to the free-form measurement based movement, and could soon appreciate the varied tactics this encouraged.

Warhammer 40k is complex, the rules can seem endless at first, but with a little patience they can be remembered. Before you can play you need to create an Army List that details each of the miniatures in your army and identifies guns, equipment and abilities they have. This list is created by adding up the points that each person or weapon is worth until you have an army total. This is vital to ensure you have two sides that are equally matched, and often leads to players spending time between games refining and developing their armies.

It's up to the players what points total they want to use, but the starter set only contains around 500 points per side. This is a perfect amount to start with so things don't get too hectic. Once your armies are ready and the table is set up then you can finally start playing. Each turn is broken down into phases: movement, shooting and assault.

The movement phase allows you to move your army a regulated amount, the shooting phase is used for attacking the opposing army from a distance and assaulting takes the combat to close quarters. This is achieved by rolling certain dice for each weapon you shoot - the army codex book (available separately) and rule book stipulates which and how many dice to roll. This dice rolling is also used to total damage that you receive and to save figures on the board that are dying.

There are some genuinely wonderful moments to be had once you've learnt the many intricacies of the game. Getting together with friends and enjoying friendly banter over the firefight below is a joy. Even in defeat the laughs keep coming, one of my most recent games saw a group of us giggling frequently. A friend of mine made an error in tactics by lining up four of his tanks next to each other, when one of them was destroyed they created a chain reaction that saw all four tanks turn into craters. He soon learnt from his mistake, so did we.

Although there is a fair amount of luck, tactical movement and use of the board separates experienced players. This, combined with the skill of creating a balanced army gives the game longevity. There is also the hobbyist making and painting aspect to the experience which takes Games Workshop games into a category of their own.

Battles in Warhammer 40k can vary in time; the starter set will allow smaller games of around an hour but once you've added to your army some games can last over six hours if you feel so inclined.

Games Workshop state that children can easily learn to play the game, but there is a lot of mathematics and lateral thinking involved. The hobby of collecting an army is the most appealing aspect to younger players, who then graduate into the more competitive aspect of play as they get older.

Warhammer 40k is an involving game, and perhaps more of a hobby in its own right than a board game. Armies can be expanded from the initial starter set of a 500 point army to limitless sizes, some friends and I have even played battles with over 8000 points per side that have lasted for 10 hours.

The beauty is in how involving it can be, you really sink into your role as a general and take pride in winning the war. The game's universe is backed up by swathes of back story and history so the game never truly finishes as you read about your army.

It should be noted that this can be a costly hobby; the starter set is great for value for money but adding to the ranks can be expensive, taking up 40k is not a decision to be taken lightly. There is nothing better, however, than two armies laid out on a tabletop ready for battle, knowing that you built it all by hand.

You can support Ed by buying Warhammer 40k