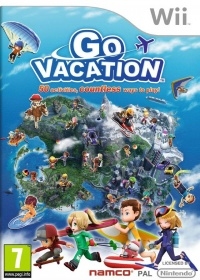 Other GamePeople columnists have reviewed this from their perspective - huh?:
Family Gamer (Wii)
Novel Gamer (Wii) 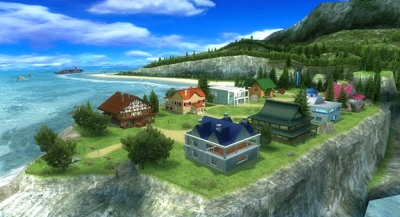 Go Vacation has many game elements we love (and in spades): exploration, puzzles, hidden objects, dressing up and, dare I say it, mini games.

Go Vacation ticks a lot of boxes even for us, a veteran board game family. Take dress up games, we've always enjoyed creating Miis (though Iona prefers reinventing herself using one of the available avatars) and here we get to change their outfits too. Mum immediately wanted to change from her default bathing suit into more suitable clothing.

The there's the hidden object games like finding the treasure chests to unlock new outfits. This turns into more of a puzzle game as spotting a treasure chests is one thing, figuring out how to actually get to that cliff ledge or roof top is quite another.

There are also race games, perhaps not our usual fare but the action replays, with their various and interesting camera angles (ed: not a million miles from Gran Turismo), means we can at least laugh at where we went wrong.

But beyond all this there are four resorts to explore, each of which feels huge. You start in Marine Resort with its wide bay, sandy beaches and inland jungle connected by paths that criss-cross on multiple levels using viaducts and suspension bridges. Walk down the beach into the sea and you start swimming, but we preferred to hit the vehicles: ATVs on land and in shallow water or Marine Bikes on the open seas. ach player has the freedom to roam where ever they want. The multi-player split screen allows up to four players to follow each other around (not an easy task!) or go to a different location within the same resort if desired.

Sticking together is not made any easier by the fact that all the vehicles achieve high speed very rapidly, a necessity getting from place to place without boredom setting in. The controls are not easy but I take this to be a fun challenge rather than a design fault. While the grownups soon learned to 'dab' the accelerator, the kids still zoom around at maximum speed, crashing frequently but without too much frustration. There are also long haul transport systems provided -- ferries and planes in Marine Resort -- which are great for spotting new areas and features to explore.

There are four resorts to explore, each of which feels huge.

As should be expected in a family-friendly game, Bad Things don't happen. If you ride ATV off a ledge into deep water or you embarrass yourself by overshooting the shoreline and ride up to beach on your Marine Bike, the camera tastefully fades out and you find yourself stationary in a position just prior to the accident, as if nothing happened.

When you glance an innocent passer-by on your ATV they wobble (and complain) but they don't fall down. The worst incident was when I was hit head on while walking through a road tunnel: the resulting shock and long rumble of the Wii Remote stayed with me for quite a while afterwards. However, the absence of negative consequences could be perceived to encourage reckless behaviour!

Oh yes and then there's the mini games (as Aurora once recalled, glassy eyed). Each player need merely sample a few to unlock further resorts, which is just as well because some are decidedly tricky and would otherwise result in a very frustrated children.

We haven't lingered on many, though Mum uncharacteristically refused to move on from the ATV Trick Combo game until she'd put in a respectable performance, and the water gun fight was as lot of fun once we figured out how to move around. Amazingly, the rather simplistic dance game in the City Resort was our introduction to this genre and has inspired us to check out something more advanced.

You don't have to try too hard to get totally immersed in the gameplay.

All the family, young and old, agree you don't have to try too hard to get totally immersed in the gameplay. The kids' approach is to discover and unlock features and progress through the resorts as quickly as possible, almost to the point of competitiveness. It was very important to both girls to get to ride on a horse and they always take their dogs with them (ed: you can collect a party of people and animal companions through the game).

The grownups, however, wanted to get to know the initial Resort, savour the environment, give every challenge event a fair chance (and linger on the choice ones), to ensure the game lasts for many sessions to come. This partly explains why I haven't yet moved on from the City Resort but mostly because it is simply so much fun.

As well as this engaging reality, Go Vactaion knows when to play fast and loose with the real world to keep things enjoyable. Skating in particular has absolutely no respect for the laws of physics. The jump action is grossly exaggerated, you merely have to touch a rail to start riding it at amazing speed, plus you can change direction while in the air (presumably using the skateboard as a rudder). You can ride vertical rails and skate straight up the sloping sides of buildings right to the top.

In other games it would jar, but here I have absolutely no problem suspending disbelief with any of this because it makes me feel like a superhero. Even the female members of the household who originally feigned headaches in the City have grown to like it a lot. The moment I managed (and the times I just missed) to land on a rooftop to get a treasure chest elicited screams of excitement!

We shall still be playing Go Vacation everyday weeks from now.

Since the day we received it Go Vacation has dominated our gaming sessions, as a family, as a couple and individually. From what I can tell from watching the kids' sessions -- and it's one of those games that is almost as exciting to watch as to play -- the Snow Resort is everything we love about Family Ski and Snowboard but with an even bigger mountain and the new ability to ski uphill using a snow mobile.

We all have lots to look forward to and I expect we shall still be playing Go Vacation everyday weeks from now. I've not even touched a board game or meeple in days, there's still too many treasure chest outfits to find, not to mention than final Mountain resort to investigate -- I hear they have horses, but haven't told the girls yet.


You can support Ed by buying Go Vacation