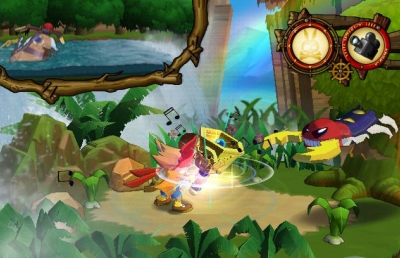 Zack and Wiki's adventure puzzles got us working together more than we do playing board games. Although the character's cartoon death was a little much for our young kids, we still enjoyed solving puzzles as a team.

I originally bought Zack and Wiki: Quest for Barbaros' Treasure with the intention of playing myself. I was having withdrawal symptoms having finished Little King's Story. I figured the cutesy graphics would hit the same sweet spot and I'd heard the puzzles were challenging. The game has been around for a few years now, meaning it is readily available used at low prices.

What I hadn't reckoned on was having to share it with the girls. I let them sit in on the premier. First impressions are everything in our house (I've a pile of board games that have only been played once and I attribute their lack of success to having been premiered when the players weren't in the right frame of mind; I have another pile of board games that I have had for years, waiting for the right time). The girls liked it immediately and truth be told 'got it' before I did. I put this down to the excellent tutorial, which of course doesn't feel like a tutorial at all.

The 'scene setting' hints appear on the screen as subtitled dialog between the characters: this is fine, we like doing the characters' voices ourselves anyhow. In fact, we often play that game where you mute the TV, switch to a random channel and voice the characters in an amusing situation of your own invention which you often need to adapt suddenly as the on-screen scene changes unpredictably. It always ends with us all in stitches.

Homemade voice work aside, we really warmed to the characters and appreciated the change from more realistic looking games you see these days. We find the characterisations genuinely laugh out loud funny, such as when Zack is flying through the air and we get a close up to show he is unperturbed, munching on a chocolate bar.

All this made us keen to progress - to get on and solve some of the levels. But if we are going to do that we will have to tackle some genuinely difficult problems.

We listened to each other's ideas and were happy to pass the Wii-mote to the person who had what sounded like a good new approach.

Our first session, being the tutorial plus the first scene (easy to solve and with lots of hints from Wiki) was a lot of fun. We felt like we'd achieved a lot in that 45 minutes too. It gave the kids enough confidence to play and complete a level on their own, something which often ends in tears. They proudly demonstrated how to complete this level in the next session we played together.

Though there were stresses to come, this third session we had together was our most successful to date. We listened to each other's ideas and were happy to pass the Wii-mote to the person who had what sounded like a good new approach to try - the game has the ability to use further Wii-motes to point on screen to help the person currently in the driving seat but we quickly found that sharing the one Wii-mote worked better.

We sought consensus before consulting the Hint Oracle. Not only was it fun, I felt that we had successfully completed a team-building exercise. I was one proud dad and told everyone so. It wasn't to last.

But there were a few snags along the way. The first is that the kids really, really don't like getting killed. When the puzzle goes fatally wrong, I would habitually restart the scene without so much as a second thought, trial and error and all that. But it soon got to the point where the kids were pleading with me to avoid getting killed and bursting into tears when their fears were realised.

Things came to a head when a cliff gave way just as we thought we'd got the treasure and I couldn't find a suitable object to break our fall quickly enough. I completed the level on my own after the kids were in bed, initially vowing "Never again".

But it soon got to the point where the kids were pleading with me to avoid getting killed and bursting into tears when their fears were realised.

But after everyone had calmed down, I decided to risk another session. I've since ameliorated the problem by ensuring we take the time to collect as many coins as possible and a good stock of platinum tickets to resurrect rather than start over.

This certainly helped us along, but couldn't hide the fact that the kids started to lose patience with some of the puzzles. More liberal use of the Platinum Tickets led to increased usage of Oracle Hints, to the point where we seemed to lose the ability to think for ourselves as a group.

Simply put, the kids were getting bored and frustrated. I haven't figured out the cure for this and I've been reluctant to play this game with them since. I think the answer might be for me to go on ahead and complete a few levels, then gently coach the kids in a later session, perhaps letting them take turns on being 'in charge' of a particular level.

I'm still optimistic that we can continue to get fun out of this as a daddy-daughter thing. If the next session doesn't go well I won't be too down-hearted -- slightly relieved even -- because I really enjoy playing this one on my own.

You can support Ed by buying Zack and Wiki