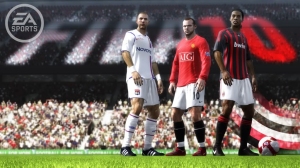 After last year's impressive effort, FIFA 10 on Xbox 360 and PS3 begins its defence with a number of greatly improved features that ensures its place as the football game of choice for football fans. This diminutive video game now offers not only dynamic dribbling, advanced Artificial Intelligence, accurate ball physics but also some frighteningly accurate player likenesses to keep FIFA for PS3 and 360 ahead of the competition by a vast margin.

Each year FIFA comes out with a list of upgrades and new features, but FIFA in 2010 looks to push the envelope a little further this year with a raft of changes that improve the overall experience. The most telling of which is the new 360 degree dribbling system that aims to give you the most control ever experienced in a FIFA game.

After a little confusion over the release date, now the game is finally with us we can see this refinement of the control system means there's a far more sophisticated system to manoeuvre the ball, interact with other players and generally emulate the battles that occur over the pitch in real life. One aspect of FIFA on both PS3 and 360 is that's always been lacking is the feel and control that Pro Evolution Soccer has always excelled at. But the new system puts FIFA 10 ahead of its competition along with some new ball physics that improve the 'feel' of the game tremendously.

Other changes include the enhancement of the Artificial Intelligence and this definitely helps to bring a new level of interaction to this soccer video game. Team-mates will move with a definite purpose and will analyse the match situation accordingly - making curving forward runs to stay onside and varying their attacks to add variety when pushing forward. They'll also behave like real defenders when tracking back, focusing on the ball and moving with greater speed and urgency when the goal is in danger.

Positioning has also been an aspect that's always needed improving - now defenders cover the spaces left by other team-mates and generally act with more of a football brain. Nothing takes you out of a sport more than idiotic opposition and FIFA 2010 appears to have given all the players a proper, tactical mind that offers a real football challenge. The new animation engine has also rid the game of the usual canned situations that plague football titles and also added dynamic weather that actually affects playing conditions.

The one aspect of FIFA that I've always wanted the greatest improvement from was the Manager Mode and this year it really delivers a far deeper and rewarding experience than before. Player transfers are now much more realistic and the whole Manager section of the game has been redesigned visually, making it easier to use and understand. It's not on a level with Football Manager 2010 or Championship Manager 2010, but its starting to become its own addictive mode of management sim.

Arguably the most interesting part of FIFA is the 'Be a Pro Mode' and this year it takes on the form of 'Virtual Pro'. This is all about designing a football player, which can make use of your 'Game Face' using the PlayStation Eye or Xbox Camera, and using him in any offline mode of the game you like - even in the kick about Arena that you see between loading matches. Playing in any of these modes builds experience and subsequently becomes the most addictive part of the game. There's nothing quite like levelling up your Pro from a lower league chump to a Champions League winner on the road to the world cup.

If there was one aspect I always found difficult about previous releases, it was the errant crossing mechanic that never yielded any opportunities. But this year I was happy to see the fast, counter-attacking style of play that I used to enjoy in Pro Evolution Soccer 3 & 4 was back with a bang. Getting to the by-line and whipping in a fast cross for my striker to send into the back of the net was immensely satisfying and made all the more sweeter when putting my friends defence to the sword in multiplayer. Even my on looking children and family couldn't fail to be impressed.

Building on previous releases of FIFA can lead to a slow and unremarkable progression from year to year. But this latest FIFA not only keeps its crown as the best Xbox 360 and PlayStation 3 football game but extends that lead to an unassailable level. It plays like football, reacts like football and beats you like football. What makes it so compelling is that the authenticity of FIFA's license never outweighs the fun of playing a game - and it keeps you coming back for more.

You can support Jan by buying FIFA 10