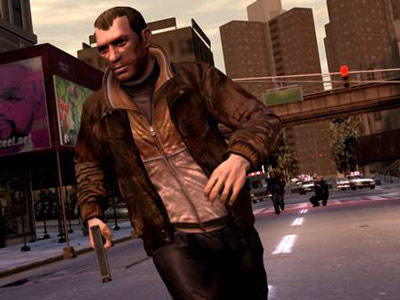 One of the most anticipated releases ever, Grand Theft Auto IV for the Xbox 360, PS3 and PC is the story of Niko Bellic, an immigrant from Eastern Europe trying to escape his past and live the American Dream. The involving and dramatic story drags Niko and his cousin into a dark criminal underworld and they soon learn that the reality is very different from what they dreamed it would be. With an amazingly detailed Liberty City to explore and tough decisions to make, this is the grittiest and astounding Grand Theft Auto ever made.

Taking control of Niko Bellic, fresh off the boat from a war-torn Eastern Europe, Grand Theft Auto 4 is the pinnacle of the series in terms of technical accomplishment and narrative direction. Eschewing the comedic and comic-book style of previous games in the series, GTA 4 puts all its emphasis on the gritty realism of Liberty City and the characters that make it live and breathe.

The biggest change is the story itself. No longer is Grand Theft Auto about a rags to riches plot that sees you take over and dominate the town like a kingpin. The path of Niko and his cousin Roman is full of dark paths, betrayals and tragedies which all conspire to give the game a much moodier vibe that makes you feel far more connected to the characters. With parts of Niko's shadowy past coming back to haunt him, Grand Theft Auto 4 really gives you an experience like never before.

The city itself is just as much a character as Niko, with the visible detail in the game adding so much to the atmosphere and lending it an air of authenticity that previous games have never achieved. Pedestrians react and act like proper human beings, interacting with each other and the world around them even if when you're not interfering with their lives.

Perhaps one of the most revolutionary aspects of GTA IV is the way the mission structure has been amended from previous games. There's a blending of in-mission and out-of-mission play which leads to a much more freeform style of gameplay. The added variety means that most mission types are unique with some epic story twists and homages to modern movies like Goodfella's and Heat.

Inbetween missions there's the opportunity to use your free time in new and exciting ways. Liberty City has a diverse range of social activities that you can take advantage of, either on your own or with a friend. There's comedy clubs showing stand-up routines from Ricky Gervais, bowling alleys, gentlemen clubs and bars - housing a range of unique activities to immerse yourself in the game even more.

Extending the life of the game away from the awesome single-player experience is the addition of Grand Theft Auto 4 online. For the first time ever you can venture online with your own unique personality and enjoy a huge array of different modes with up to 15 others in Liberty City. The best of these is the co-operative challenges which see you escort a single player to a certain escape point whilst the enemy team tries to eliminate you. But the most entertaining is the Freeform mode, which turns Liberty City into a playground for you and your friends to do whatever you want in the Grand Theft Auto world.

With all this additional content the one aspect I kept coming back to, time and again, was the story of the main game. Previously, GTA games have trodden the path of the recent Saints Row 2 by shoving a ridiculous type of content into its world and having it live alongside the story. Here, the world that Niko inhabits feels much more realistic and believable. It might be gritty and forlorn at times, especially when the story takes a darker path, but it feels consistent and far more alive than any other game I've played.

It's not without its humour either. From the quick remarks that the pedestrians say to some of the more outlandish characters you'll come across, GTA 4 still has its satirical bite that's as strong as ever. When you have a main news station called Weasel News that's as biased and reactionary as a certain other animal-sounding news network, the you know Grand Theft Auto 4 is right on the money.

With an improved combat system that lets you take cover and lock onto targets easily, this is the most accessible and deep GTA you could play. It's ability to take a serious story and make it fun, believable and moving shows that GTA 4 is one of the greatest games ever made and deserves to be found on every gamers shelf.

You can support Jan by buying Grand Theft Auto IV