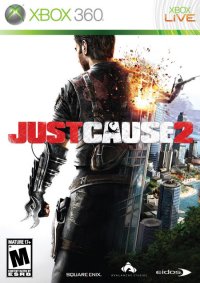 Other GamePeople columnists have reviewed this from their perspective - huh?:
Perpetual Gamer (360) 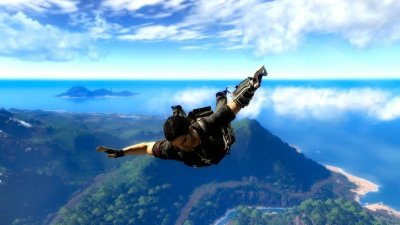 Just Cause 2 creates a beautiful world in which to play, not only fleshed out with day/night cycles, but also an impressive array of climates and terrain. Add to this the exquisite controls in the parachute and grapple mechanic and you have a 360 video game you simply must rent or buy. Although the mission driven levels don't do this justice, simply playing in the world more than makes up for this.

Just Cause 2 is a sandbox action game, not a million miles from the likes of Grand Theft Auto but set in a jungle island rather than a city. The fictional island of Panau is as detailed and varied as Rockstar's impressive Liberty City, only here you have hugely varied landscapes to explore.

It's into this setting that Rico Rodriguez returns as the protagonist, to overthrow the evil dictator Pandak "Baby" Panay and confront his former boss, Tom Sheldon. The game opens with a helicopter ride to the new location, and quickly sets you up with the tools you need to navigate, battle and proceed through the missions.

This is where things get really interesting. Alongside the usual set of firearms, vehicles and gun emplacements, you have some special technology at your disposal in the form of a parachute and grappling hook. These two simple introductions enable you to interact creatively with the environment.

At any point you end up falling off a high building or mountain, and there are plenty, you can pull you parachute out and take to the skies. Once airborne, you can use your grappling hook to pull yourself through the environment and stay in the air.

Back on the ground, the grapple can then be used to pull yourself onto any object in a semi-flighted style. If you played GoldenEye Agent Under Fire, you'll know how well this works. At any moment you can pull yourself out of the action by grappling away onto convenient architecture.

The grapple has other uses too, you can attack people with it - either directly or pull them off buildings to fall to their deaths. You can also tether two objects together. There was a magical moment when I realised I could tie a pursuing vehicle to a passing bridge and watch it go flying - inspired.

The quality of execution of these tools alongside the breathtaking settings and views of the environment make Just Cause 2 a place you will want to spend a lot of time. I was slightly surprised that the missions didn't quite live up to this level of quality. Most of these revert to type and are a mixture of fetch quests and escort missions.

Nevertheless, this shouldn't put you off from jumping into Just Cause 2 with both feet. Any mission shortcomings are more than made up for by the breathtaking setting. There comes a moment when you figure out how to use the parachute and grapple in combination, from then on the game takes on a whole new feel.

Simply getting from a to b is a lot of fun. And if you get bored of propelling yourself there are a load of vehicles you can make use of - from military cars to motorbikes to planes. Realising just how much is on offer soon re-ignites the sense of intrigue and fun as you go on the hunt for bigger and badder machines to ride - culminating in a jumbo jet.

The genius here is that the missions offer a familiar challenge for hardcore gamers, whilst the compelling and open world is a big pull for more casual players. While you may rent this 360 video game for yourself, don't be surprised if friends and family also want to get in on the action - particularly once they experience the open island setting.

While many reviews may compare this to other cheaper Xbox 360 games already out, what they are in danger of missing here is the simple fun Just Cause 2 has to offer. As well as a traditional game, you can have a lot of fun just playing around in the island - exploring, jumping, flying and crashing. Get to the top of a mountain or sky scraper and the view is simply breathtaking vista over the rest of the environment.

It's this aspect of Just Cause 2 that makes it such a great game to play in groups. We got in the habit of setting up our own timed races between two points on the island. Each of my friends would take turns using any means available to make the trip in the shortest time. One of us discovered a nearby plane, but struggled to land it. Then someone else realised they could just jump out and parachute down to terra firma.

Just Cause 2 is a wonderful combination of Crackdown, Midwinter (for those that remember the Amiga) and Uncharted. Rent it for a few nights, although I suspect you will soon be looking for a cheap 360 copy to own before very long.

You can support Jan by buying Just Cause 2