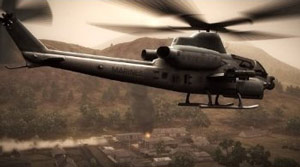 Operation Flashpoint: Dragon Rising on 360 and PS3 is the long awaited return of the soldier simulator that defined the genre since its inception. Delivering the complete battlefield experience, Dragon Rising puts players in the midst of modern combat, with the chaos and elevating tension that the contemporary theatre can bring. With the ability to take on the role of an infantry marine, helicopter pilot, special forces operative or tank operator, Operation Flashpoint Dragon Rising brings the intense hard action of real combat to the Xbox 360, PlayStation 3 and PC like never before.

With its emphasis on brutal authenticity, Operation Flashpoint Dragon Rising is the most intense soldier simulator ever created since the original back in 2001. This sequel expands and updates the experience to take in an immense conflict against the Chinese PLA that will impress and overwhelm players due to its massive scale and impressive array of vehicles and equipment.

This level of depth puts you into a world that feels as authentic and as harrowing as real modern combat but is incredibly engaging as it pulls you into its world with consummate ease. The scale of the battlefield means the unscripted missions offer a limitless amount of variety and enable you to approach objectives in a real and exciting new way. This is a game where intelligent tactics and the use of deadly capable military force is critical to ensure success.

The attention to detail in terms of the weaponry, equipment and vehicles makes Operation Flashpoint 2 stand out amongst other First Person Shooter (FPS) competitors. Whereas Call of Duty Modern Warfare and Battlefield Bad Company put the emphasis on instant gratification, Dragon Rising is all about the authentic soldier experience. There's detailed ballistic physics for each weapon and ammunition type, vehicles such as tanks, utility and attack Helicopters are accurately modelled and the system for injuries is unlike anything used before in a videogame. The way you take damage is simulated on your character depending on what weapon has injured you - with attention like this it becomes clear that Operation Flashpoint is pushing the envelope in terms of realism and immersion to the highest level.

The campaign will see you take on a variety of roles within the game, from following orders as an infantry trooper to commanding a tank assault on an enemy stronghold and co-ordinating laser-guided aerial strikes as support. All these aspects are portrayed in an amazingly detailed way that gives you a better understanding about modern military tactics and how different units operate on a battlefield.

And what a battlefield it is. With over 135 square miles of terrain ranging in valleys, mountains, towns, villages, industrial areas and coastlines, the variety and breadth of the game is simply breathtaking. The way it remains persistent also lends realism to its existence that games rarely achieve. The destructible nature of Red Faction Guerrilla and Battlefield: Bad Company is taken a step further in Operation Flashpoint. Destroy a building in one mission and it stays the way you left it - down to the very brick - for the entire game, meaning that the world has a lived-in feel that accentuates the combat and leads to some truly dynamic battles that rely on astute tactical decisions.

The moments that made the most impact for me were during the semi-scripted situations and cut-scenes. Here the story unfolded exactly like an authentic war documentary with a shaky camera, out-of-focus shots and an attention to detail that is breathtaking and awesome. This realistic style did wonders for pulling me into the experience and making me think about what would happen to my squad-mates if I screwed things up. This connection with a game is such a rare experience for me that Operation Flashpoint Dragon Rising is the most involving game I've played on the Xbox 360 or PS3.

Offering an experience for the true hardcore FPS fan or solder simulator aficionado, Operation Flashpoint Dragon Rising gives you an unforgettable experience for the Xbox360, PS3 and PC. Whether it's the unrelenting realism of modern combat or the extreme tactical nature of fighting intelligent enemies, this is a game that shows hard-boiled realism can be achieved in a videogame and that it's an experience well worth savouring.

You can support Jan by buying Operation Flashpoint: Dragon Rising