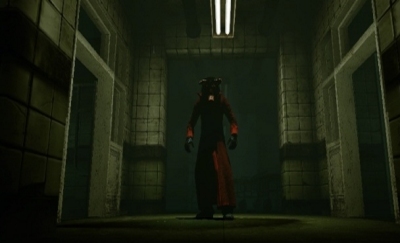 Saw: The Video Game takes the gore of the film series to the Xbox 360 and PlayStation 3 consoles. This third-person shooting game, timed to release alongside Saw VI, has unique story lines that visit familiar territory. With an emphasis on puzzles with a horrific twist, the game tasks the player as David Tapp, to escape the abandoned asylum using his wits and observation skills. Beyond the blood, guts and fears this is a puzzle lover's game.

The Saw films have become famous for their pornographic (in a non-sexual sense) depiction of violence. In fact they pretty much create a new genre for themselves, torture-porn. Here individuals are placed in life threatening scenarios where the main threat is suffering rather than death. The twist in these plots is often getting the individual to commit acts of violence towards themselves to escape some perceived greater bodily evil.

Saw the video game on the Xbox 360 and PlayStation 3 consoles takes things in a more puzzle oriented direction, whilst retaining those classic Saw gross-out moments of sheer depravity. After the fuss over Man Hunt 2 on the Nintendo Wii it's perhaps for the best that they've steered clear of Nintendo's more casual console.

The action proceeds along traditional survival horror themes - a combination of solving locked door and reaction tests and general survival. The game has changed hands a few times, but finally bedded down under Konami and has become the spiritual successor to their other survival horror franchise, Silent Hill.

Although the pace is slower than the likes of Resident Evil 5, and certainly no roller coaster, the plodding doom of each and every foe imbues proceedings with a real chill. The player has several abilities to aid his escape although they are soon forced to bring themselves down to the base level of the franchise and will find themselves searching toilets and dead bodies for clues.

Weapons, health and clues to help progress are scattered through the dark environment. In the same way, fragmented messages from Jigsaw, the series foe, slowly piece a picture together of why Tapp is there. These 'Jigsaw Notes' are found lying around on cassette tapes and not a million miles away from the 'Holotapes' of Fallout 3.

Playing Saw you are constantly aware of the franchise behind the game - but in a good way. Even in the quieter safer moments you know there are no depths they won't stoop to. Around the next corner could be your worst nightmare. Even when the game miss-times its shock and gore, this carries the experience on and really keeps you on your toes.

Saw: The Video Game on the 360 and PS3 will no doubt garner criticism from some quarters. But in fact this game is a lot more considered and in many ways tamer experience then the films. Those looking to relive those filmic survival horror moments in first person will revel at the opportunity to go toe to toe with Jigsaw themselves.

You can support Jan by buying Saw