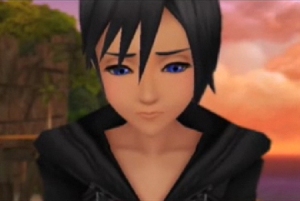 The popular Kingdom Hearts series continues with this new game for the Nintendo DS. Following the story of Roxas, Kingdom Hearts 358/2 Days lets players discover more about this 'other' Hero from Kingdom Hearts 2 and his days in the mysterious Organisation 13. With no memory of his former life the game takes players on a journey to discover Roxas' identity and the connection between him and Sora - the main protagonist of the Kingdom Hearts series. All these mysteries and more are uncovered in a world filled with familiar Disney characters and locales that will entrance series veterans and newcomers alike.

The Kingdom Hearts series has always been a bizarre mix of characters and locations from the Final Fantasy saga and the world of Disney. Even though this set up sounds odd, the games have always managed to tell epic adventure stories with the familiar characters offering an easy way into the experience. This latest Kingdom Hearts DS game tells the story of Roxas - the mirror image of the usual series hero, Sora. Roxas wakes with no memory of his former life and only the shadowy Organisation 13 to cling onto. By defeating shadow monsters known as heartless, you help Roxas to slowly regain his memory and rediscover his identity.

Making a change from the previous games in the series, Kingdom Hearts 358 2 Days alters the gameplay by breaking up levels into challenging missions. The freedom to choose your own quests and the way you're allowed to set your own pace really encourages a lot more exploration, giving you the chance to take in more of the world you're playing through.

These levels take place across familiar and classic Disney worlds which bring back fond memories of the PlayStation 2 games whilst also keeping the experience fresh with some new and exciting areas to discover. The missions are nicely varied as well and the ability to pick and choose from a variety of options makes this an easy game to tailor to your strengths.

The battle system is immensely satisfying as well, with all combat taking place in real-time and an emphasis on combo's and quick moves. Choosing abilities and spells could get a little tricky at this point but the interface and shortcuts make it far easier than you would initially expect. What will also help when battling the heartless or the impressively large bosses are Limit Breaks. This special near-death ability is taken from Final Fantasy VII and means that you can unleash an explosive and powerful attack right when you need it.

Even though I was impressed with the presentation and combat system, my most cherished part of this game is the way it tells its story. This is the darkest Kingdom Hearts game I've played but the emphasis, more than the Disney Characters or the familiar world, is on friendship. Far from being a saccharine experience, Kingdom Hearts 358/2 Days explores what makes a person 'real' and leads on to understanding who you are and where you came from. Even though this can leave some missions feeling sad and lonely due to the absence of many fun-filled characters, it gives the game a soul I wasn't expecting. Only Persona 4 and Lost Odyssey have managed to reach that level of immersion for me in the past.

A worthy successor to the previous games in the series, Kingdom Hearts 358/2 Days deserves to stand out as truly involving RPG in its own right. The gameplay and gripping plot keep the series fresh but also deliver an experience that's a charm to play and one that all Kingdom Hearts fans will cherish.

You can support Jan by buying Kingdom Hearts 358/2 Days