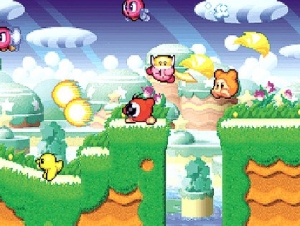 Kirby is one of Nintendo's best loved characters. Kirby Super Star Ultra on the Nintendo DS offers an impressive 12 hours of adventuring. While old favourite modes return with updated visuals, new play options are also introduced. Co-operative adventure play over the DS console's wireless function as well as new stylus controlled minigames. This is much more than a re-release of the Nintendo SNES version, updated and expanded Kirby Super Star Ultra has a lot to offer.

Although Kirby is a popular and well known Nintendo character, he has seen less of an airing than other favourites such as Mario, Luigi or even Princess Peach. Kirby Super Star Ultra looks to set this straight. It follows up on the critically acclaimed and unusual Kirby's Canvass Curse on the Nintendo DS with a more traditional Kirby platform game experience. Rather than focusing on innovation as in the previous titles, Nintendo here show their hand at bringing a classic SNES game to their portable DS console. And this works just as well as it did with the Super Mario 64 DS console launch game.

Unlike the new and novel game play of Kirby's Canvass Curse, Kirby Super Star Ultra essentially revisits the best bits of the original Super NES game. Thankfully this is much more than a straight copy and paste into new hardware. Even if you did play the original to death there is still plenty to enjoy. Not only that, but the adjustments for the DS are testament to just how well the developers understand their original game - and what made it so delightful in the first place. Both scale and controls benefit from a sensible adjustment to suite the new hardware.

True to form, although it is essentially a platform game, Kirby Super Star Ultra does away with many conventions of that genre. Firstly Kirby's ability to float removes the need for the tricky runs and jumps that make the Mario games so challenging. Then there is his ability to steal enemy powers by swallowing them - the more challenging the foe the greater the opportunity there is to steal their abilities.

Kirby Super Star Ultra is most fun when played with two players. Whether players opt to bring in computer controlled ally or use the Nintendo DS WiFi function to play with another person, co-operation and competition make the platforming really sing.

Even in getting started with the controls and Kirby specific abilities I couldn't help but smile. I found it gleeful to be able to absorb enemies rather than simply dispatch them. Turning their powers on their comrades felt both ironic and amusing. In fact I spent probably my first half hour with Kirby Super Star Ultra just playing around with some unfortunate grunts of the first levels.

Even though this is not technically a new Kirby adventure, every effort has been made to make it feel like a new built-for-DS experience. The game is well judged in all areas, not least in the casual pick-up-and-play nature of the hour long quests. It may not be as creative or difficult as Kirby's Canvas Curse or as original as Kirby's Squeak Squad, but it is the closest we have so far come to a proper new Kirby game on the Nintendo DS.

The quality platforming fun here again reminds us of the rich history in Nintendo's back catalogue. Kirby Super Star Ultra flies the floaty pink powder puff flag for a fresh generation of gamers.

You can support Jan by buying Kirby Super Star Ultra