Other GamePeople columnists have reviewed this from their perspective - huh?:
Soulful Gamer (360)
Scared Gamer (360)
Intimate Gamer (360) 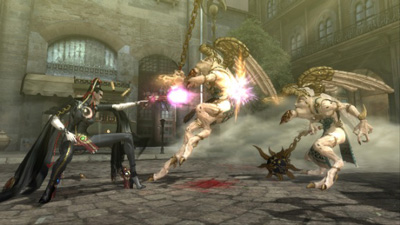 From the creator of the highly successful Devil May Cry series, Bayonetta for the PS3 and Xbox 360 is an extraordinary stylish, over-the-top action game that blends fast-flowing combat with some amazing enemies and environments. Playing as Bayonetta, a witch with incredible and spectacular powers, you face angelic demons, evil enemies and boss battles that are enormous in scope and concept. With an impressive visual style and dynamic combat coming together in a blend of balletic brilliance, Bayonetta pushes the action-brawler started by God of War into new and exciting territory.

There's something inherently unique, crazy and over-the-top about Japanese games in general - whether it's the extraordinary worlds of Final Fantasy XIII or the insane action of the Devil May Cry series. But Bayonetta takes all the insanity from director Hideki Kamiya's previous works, strips out the dark and dry storyline and pushes the visual spectacle to the maximum for full effect.

The result is an experience unlike any other you're likely to have for years to come. It's similar in many ways to God of War III on PlayStation 3 as you attack and dispatch enemies by using a variety of weapons. But whereas God of War took its storytelling a little too seriously, Bayonetta gleefully fills the bite-sized cut scenes with campy humour and several winks to the camera as it goes about portraying a character and a world that stretches the imagination to breaking point.

The main character, Bayonetta, is as sexy as she is capable. She can deliver devastating combat combo's and the game plays up her ninja Barbie physique and secretarial look at every opportunity. It never feels exploitative though, as Bayonetta is an incredibly tough and uncompromising anti-heroine even in the midst of all the silliness that's on offer. In the end the titular star comes out as one of the most impressive Japanese characters in recent years and the objectification of her looks is kept within the keeping of the game's setting.

Everything, even down to the presentation of basic combat, is put on show as intensely as possible. With twin pistols attached to her stiletto's and a variety of over-sized weapons at her disposal, the simple business of dispatching common enemies turns into a carnival of colour, gore and spectacle. Yet Bayonetta still retains a balletic quality even in the most intense combat situations and it's hard not to be bowled over by how smooth and effective the fighting system is, even when overwhelmed by a multitude of enemies.

And this is all before we get to the boss fights which contain some truly impressive moments and give the visual look of the game an epic and towering feel. These larger encounters don't just look tall and dwarf the other content on the screen; they also interact with the environment in some shiver-inducing way. Being chased by an enemy that rips up the bridge you're running over and then holds it aloft as you're trying to defeat him doesn't fail to put you through the wringer. It's not that these enemies are just visually impressive - they also have a presence that makes you feel in peril, but also eager to open Bayonetta's whoop-ass list of impressive combo moves to take them down.

This amount of depth is highlighted in a clever twist on the loading screen for each level. Instead of having to blankly stare at progress bar I could take control of Bayonetta in a training space, free to pull off or experiment with the full range of combos listed on the right side. This turned what often feels like a chore into an addictive mini-game that had me memorising my favourites moves and spending much more time training than I would usually consider. It's a move that shows this game has been lavished with attention, from the smooth combat to the basic user interface that enabled me to get so much out of this game.

Hiding behind this explosive display of spectacle, humour and irreverence lay a truly creative blast of excellence. To see the game from beginning to end is a real War and Peace achievement - and the final boss is possibly one of the most impressive I've seen in any game. Bayonetta for the PS3 and Xbox 360 is the nadir of the action brawling genre and shows such an impressive display of imagination that it is a must buy with the highest recommendation. It may not have the soul of Heavenly Sword or the gratuitous majesty of God of War, but Bayonetta exceeds all its forbears with an extraordinary showing of pure, unadulterated fun.

You can support Jan by buying Bayonetta