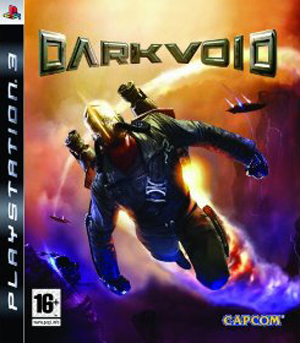 Other GamePeople columnists have reviewed this from their perspective - huh?:
Soulful Gamer (PS3)
Scared Gamer (PS3) 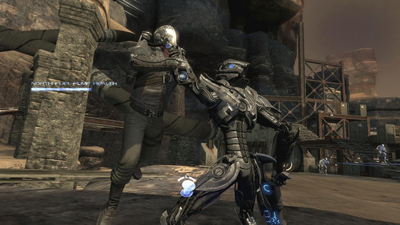 Dark Void for the PS3, Xbox 360 and PC is a totally unique 3rd person action shooter that combines aerial and ground combat with a gripping sci-fi storyline. With the action centring in an otherworldly dimension under the oppressive control of 'The Watchers', you'll fight enemies in a unique vertical landscape by using a powerful jet-pack. The blend of aerial combat and cover based shooting is seamlessly woven together in this genuinely fresh take on the shooter genre that offers an experience unlike any other.

All too often 3rd-person action shooters tread the same path that Gears of War paved four years ago. However, Dark Void for the PS3, Xbox 360 and PC has a dramatic take on the genre that shows innovation and interesting story can still be found in videogame shooters.

Following a disastrous detour into the Bermuda Triangle you are whisked into an alien universe that's under the oppressive regime known only as 'The Watchers'. The way the game pulls you into this seemingly bonkers narrative is actually very interesting and the storyline draws on a variety of popular conspiracy theories and myths to give the plot much more weight and individuality than the usual space marine guff. The time-twisting storyline includes characters such as Nikola Tesla, Amelia Earhart and also delves into other significant events like the sinking of the Titanic - this type of pulp-storytelling works well in videogames and Dark Void certainly knows how to push this forward to make it entertaining.

But story aside, the game also makes sure the gameplay is just as interesting and goes beyond the simple cover-based mechanic found in many other 3rd person shooters. The major difference in Dark Void is the inclusion of a Jetpack that opens the environment up to vertical combat in all its full, 360-degree majesty. This isn’t just a gimmick either as the aerial combat has a real weight to it that makes the dogfighting feel incredibly atmospheric and exciting. What helps to give this unique twist on the combat is how seamless the transition from ground to air combat is - there’s no loading screen to break up the flow and moving from cover-based shooting to twisting and rolling in the air is surprisingly smooth and effective.

Going through the levels via foot or in the air isn't the only method of getting about and the game offers you the chance to hijack several enemy spacecraft at your leisure. These give you much more powerful weapons and armour, although they don't come anywhere near the manoeuvrability of the jetpack.

If there's one weakness to the game then it’s with the generic cover-based shooting. It works well enough but against the more spectacular aerial combat and the thrill of using a jetpack, the basic gameplay pales in comparison and you'll want to spend as much time as possible in the air rather than the ground.

The weapons in Dark Void are also worth mentioning as they are by far the most unique I've seen in a game for quite some while. Akin to Bioshock's plasmids, the ten unique weapons are a blend of real-world firearms and energy-style guns inspired by Tesla technology. There's also the option to upgrade various parts of your equipment as well, with each item having its own upgrade path leading to some pretty spectacular and exciting abilities as a result.

What I enjoyed most about Dark Void was the way depth and scale was so effectively convey while I played. Screenshots just can't do the game justice and the overwhelming feeling of plunging vertically into a deep dark tunnel to find a huge underground complex without any loading screens is pretty special. It's an exhilarating display of scope that shows Dark Void's vertical gameplay is much more than just a novelty.

Dark Void is nothing if not a refreshing take on the staid and generic genre of 3rd-person shooters. The vertical gameplay is a breath of fresh air to what would otherwise be a fairly ordinary game. But even then the storyline introduces lots of exciting elements that gives Dark Void for the PS3, Xbox 360 and PC its very own experience and individual feel. If you were getting tired of the same old Gears of War-clone shooter then Dark Void proves that games can still offer real innovation and also deliver an exciting and impressive experience.

You can support Jan by buying Dark Void