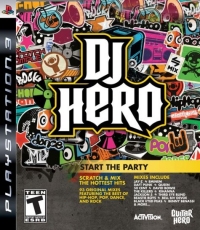 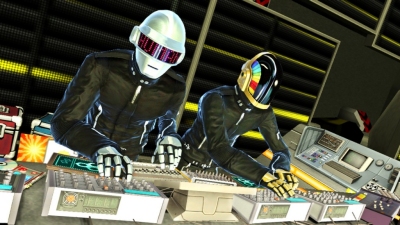 DJ Hero on Playstation 3 and Xbox 360 is a complete refresh of the rhythm action genre. The everyday feel of the now common guitar and band based games like Guitar Hero, Band Hero and Rock Band is injected with life and engrgy. DJ hero provides the player with a Record Desk peripheral to scratch, slide, rewind, tap and replay in time with some excellent and intruiging mixes.

DJ Hero on 360 and PS3 takes an idea that has been overused, and breaths new life into it. Living rooms are groaning at the thought of more fake plastic instruments, but give DJ Hero half a chance and it starts the rhythm action magic all over again.

Since the original Guitar Hero games we've had an influx of peripheral based games. Guitar Hero 1, 2, 3 and 4, Rockband 1 and 2, SingStar, Popstar, Sing It all road on the coattales of that original release. Then more recently, Guitar Hero On Tour, Guitar Hero Aerosmith, Rockband Beatles and Band Hero.

They all come with a fake plastic insturment and all open a door to creating music for everyone and anyone. Play them for a while and you soon stumble across moments of genius where your button presses are engineered to feel just like you are playing a real instrument. Not a replacement the real thing, not an easy way to learn music, but a real taste of what it feels like to play.

DJ Hero on Playstation 3 and Xbox 360 does all the usual rhythm action tricks, but rather than fret buttons and strum-bar you have a deck to spin and fader-bar to slide, and rather than whammy-bar you have a modulation-dial. Like Konami's Beatmania before, it creates a mixing experience with a replica recrod deck and mixing equipment.

At first I was suspicious that this was just another way to cash in on the craze - not to mention another plastic device to squeeze under the sofa. But as you get to grips with the different DJ moves - tapping a Desk-button to restart a track, pressing a button and moving the turntable to scratch, switching track with the Fader - you start to realise how well this style of music making fits with a 360 and PS3 video game.

Mxing is, by its nature, something of a game already. So all DJ Hero had to do was to uncover these techniques to the everyday person on the street. This it does reall well. Sitting down to play with my professional DJ friend I saw the game through his eyes and could connect the different game techniques with his highly skilled performance on a Friday night.

Add to all this the ability to bring in a guitar part on some tracks and the intruige of which music they have chosen to mix and you have a very compelling experience. Gorillaz vs Marvin Gaye, Beastie Boys vs Blondie and Eminem vs Beck are all combinations familiar to club goers, but to me they were like tiny explosions of new ideas as I was led through a mix of sounds and flavours from each.

All this is wrapped up and endorsed by the industry as well - Eminem and Jay-Z consulted, DJ Shadow narrates and Paul Oakenfold endorses. Although this is not everything, for a game so enmeshed with the real world of mixing, this sort of involvement adds substance and credibility.

This package would be impressive on these grounds alone, but where this shines for me is the exsquisit musical combinations on offer. Whether it is the interplay of 'Another One Bites the Dust' (Queen) and 'Brass Monkey' (Beastie Boys) or the moving back and forth of 'I Heard It Through the Grapevine' (Marvin Gaye) and 'Feel Good Inc.' (Gorillaz) you can tell there has been a considerable amount of care and attention on DJ Hero long before the peripheral or game itself ever existing. A real highlight that stayed with me days later is a mix of 'My Name Is' Eminem and 'Loser' (Beck), exsquisit.

DJ Hero is impressive. Just when you thought you'd seen it all along comes another rhythm action game to strectch the genre some more. What could have been a simple money spinner is in fact a competant addition to these music playing simulation games. Expect Rockband DJ before too very long. But also, expect to buy it as well if it is anywhere near as good as DJ Hero.