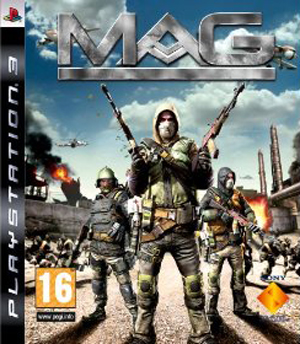 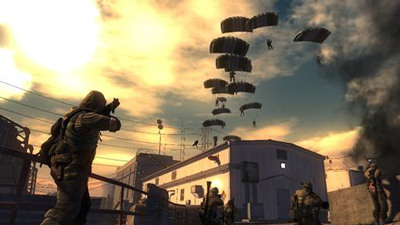 You haven't experienced a real online shooter until you've played MAG for PlayStation 3. Forget matches of 8 vs. 8, in MAG you'll be playing in a battlefield filled with 256 other players, all in their own 8-man squads. From directing air-strikes, taking part in parachute jumps and taking out enemy emplacements you'll be working towards eliminating the other team. Work towards taking command of your 8-man squad and then lead them across the battlefield to glory and promotion. MAG is the biggest and most ambitious virtual war game that has ever been attempted on a home console - lock and load soldier!

Since the summer of 2009, Sony's online-only Massive Action Game (MAG) has been in beta as the developers smooth out the ruffles and kinks that come from creating such an ambitious title. Impressions so far have been largely positive, aside from the issues you expect when taking part in a beta - like server downtime and loading issues. You start the game by choosing one of three PMC (Private Military Corporations) factions, Raven Industries, Valor Company or S.V.E.R. These all have unique load-outs and visual look with a mere smidgen of back-story to entertain you if you're remotely interested in that kind of thing.

Once you've chosen your faction it’s time to customise your character. Everything from his face to his uniform can be altered and it’s a good idea to do this from the start so you can have a unique and recognisable look in the game - there's going to be a lot of bland troops out there otherwise.

There’s no training option in the Beta but the full retail game will take you through basics of combat, issuing commands and navigating the on-screen display much like Warhawk does. But if you've played a third person shooter before (and it’s likely you have if you're interested in this title) then the game is easy to pick up and play.

MAG's uniqueness doesn't just come from the massive size of the battlefield and the numbers of players in one match - it also divides this base configuration up in an interesting way. Each 128-player team is broken up into Platoon's of 32 men, and these are then split into 8-player squads with each squad having its own designated leader. While you’re in these squads various orders will filter down from the overall commander at the head of the 128-player team and you get additional experience by successfully completing these orders.

This system encourages you and those around you to act like a proper squad and not just degenerate the game into a raucous Team Deathmatch shooter. While this works to some extent, the game still has a frenetic quality that can make reaching and completely these objectives difficult.

At the moment only two game types are offered - one is objective based and requires you to take over or defend three intelligence points. The other is a riff on the classic Capture-The-Flag mode and sees you trying to capture enemy vehicles and deliver them to an extraction point. Both of these modes offer some variety and are equally fun to play.

As you progress through each match the game eventually converges the squads and platoons together for a final and massive 128-player vs. 128-player shootout. These epic moments, when the lead starts spraying and the noise level reaches its max, is where MAG succeeds in fulfilling its lofty potential. The thrill of taking part in these closing shootouts is unlike anything else you can experience on the consoles. Battlefield on the PC had similar sized battles, but the way MAG gently funnels the experience towards this crescendo and its execution makes it far superior.

MAG isn't without its faults; the weapons feel a little weak in comparison to other shooters like Call of Duty or Battlefield: Bad Company. But this may be something beta-related or unique to third person shooting games. It's epic scope and squad-based gameplay is incredibly successful and it gives players those high-drama moments that are usually reserved for single-player story-based experiences. If the beta is anything to go by then Sony's exclusive 256-player multiplayer shooter is going to be very impressive indeed.

You can support Jan by buying MAG