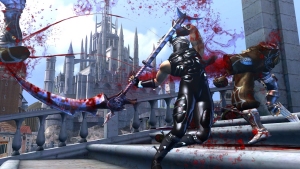 One of the more intense, action packed ninja titles is back on the PlayStation 3 in its second rendition of throwing stars and sword spinning combat. Ninja Gaiden Sigma 2 is the ultimate version of the game seen previously on the Xbox 360, swinging back onto the PS3 console with added features and new game modes. This takes the best of the original and improved both visuals and game play.

Ninja Gaiden Sigma 2 is at its core, a simple remake of the original title released on the Xbox 360 console during the middle of last year. It features our eponymous hero Ryu Hyabusa, as seen in other franchises like Dead or Alive on the Xbox 360, this time taking up his sword and other weapons against the Black Spider Clan. Although the game starts you with just your sword and throwing stars, by the end you can utilise staffs, hammers, staves, claws and scythes to cut enemies quite literally limb from limb.

With scenes of graphic violence this game is definitely for more experienced and mature players. That said though, fans of the series will soon realise this iteration of the Ninja Gaiden 2 storyline has been sanitised somewhat - much of the blood has been removed. This move takes us away from the grit and gristle of Resident Evil 5 and more towards a the super natural violence of Devil May Cry 4. Accordingly, despite still needing a mature rating, those of an appropriate age will find the going a little easier on their gore glands.

Gore or no gore, Ninja Gaiden Sigma 2 looks beautiful on the PS3 console, in stunning HD. Play this through with the requisite HD display and cabling and this is easily one of the most impressive games on the PS3 system. There are real breath taking moments as you pass through a level that add to the over sense of scale of the experience.

One welcome addition is being able to play as three different female characters for a few missions of the game. This not only mixes up the sexes but also offers players more variation throughout the adventure mode. Add to this the solid co-operative online play, where you can to battle through 30 missions with a friend and the chapter challenge high score attack mode with online leader board and you have a comprehensive package.

The audio hits the mark as well. Ninja Gaiden Sigma 2 delivers an orchestrally inspired flowing score that responds to action sequences as they arise. This is punctuated with the sound effects of combat as well as cries from those dead dying to create a sense of immersive realism I thoroughly enjoyed.

While I definitely enjoyed playing my way through this game, it was a real tough challenge at times. The Ninja Gaiden games have always had their difficult spots, but without taking your time on this one you can get truly stuck in a few places. It definitely ranks up there with the likes of some of Devil May Cry 4 or Resistance 2 on the PlayStation 3 console.

Ninja Gaiden Sigma 2 is a great PS3 port of one of the best Xbox 360 ninja action titles in recent years. It offers stunning visuals, excellent action and a punchy soundtrack, the challenge is sure to leave you looking forward to the next iteration of Ryu's adventures - and I'm not talking about Street Fighter 4.

You can support Jan by buying Ninja Gaiden Sigma 2