This is Vegas PS3 Guide

This is Vegas PS3 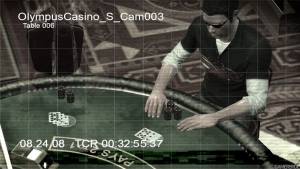 This is Vegas on the PS3 takes you on a journey from being an ordinary Joe to the ultimate VIP in the most decadent location on the Earth. Whether you're placing bets on the roulette wheel or gambling the last of your loot at the Blackjack table, This is Vegas allows you to live out all those Las Vegas moments you've only ever been able to dream about. Whether you want to enjoy the night-life at the city's exclusive clubs or cruise the sunset strip in an Italian sports car, This is Vegas allows you to live the life of a hedonist but without the hole in your wallet or the associated hangover.

The story begins with your character arriving at the resort with little more than USD50 to his name. After a drink or two, it's your job to network, gatecrash as many parties as possible and increase your bank balance as quickly as possible. At the same time, your main enemy in the game, a guy called Preston Boyer, is on a mission to turn the fabled city into a family-friendly resort and close down as many of the casinos and hotels as possible and basically spoil everyone's fun. In order to stop him you'll have to complete missions for the various Vegas factions as you progress from your run-down motel to a luxury penthouse suite.

This being Las Vegas, there's a massive emphasis on gambling and the game allows you to play various casino games including Poker, Blackjack and Slots. Interestingly the game utilises a Blackjack cheating system which gives you an edge over the house. Using your sunglasses and a marked deck of cards it's possible to see whether the next available card is either a 2-6, a 7-9 or a ten or ace card. Of course this is not without its own risks and its your job to carefully manage how much you cheat ensuring you don't get caught and banned. And, as This is Vegas really doesn't take itself seriously, getting caught cheating will either get you kicked out of the casino or at worst beaten or killed.

There's also a considerable emphasis on violence and fighting with your character able to use his fists or weapons to kill prostitutes and fellow gamblers in order to complete missions or earn extra money. The combat is actually extremely satisfying and while not original in the slightest, This is Vegas borrows all of the best bits from similar games such as Grand Theft Auto, Stranglehold and Bully. Hand-to-hand combat is also quite humourous as the game takes its cues from the 1960s Batman television series and delivers flashy graphic overlays upon every connecting kick or punch.

This is Vegas also allows you to race up and down its famous streets in various flashy sports cars which you can unlock as you progress through the game. Some you'll earn, some can be stolen from the city's occupants, but however you acquire your favoured vehicle there's a lot of fun to had tearing up and down Las Vegas's well-lit street past its famous casinos and hotels.

The game is definitely aimed at the older male gamer with its chauvinistic themes and cartoon violence and that fact that it's on the PlayStation 3 and not the Nintendo Wii or DS further reinforces this. While the game's violence and adult themes are exaggerated and comical, they are still very mature and as such, this is definitely not a game for kids but one perhaps for the dads among you in their twenties and thirties.

Much like Saints Row 2 and GTA IV I really enjoyed This is Vegas the most when it allowed me to indulge in the most ridiculous and obscene things that I would never dream of doing in real life. It is escapism at its finest. I especially enjoyed pulling off some ludicrous moves on the dance floor and even though my on-screen character looked ridiculous it was very funny and made me laugh an awful lot all of which added to the game's overall charm and attraction.

If you take the game for what it is: over-the-top cartoon escapism, then there's a lot of guilty enjoyment to be had from the game's Fight Club-esque fighting and its Grand Theft Auto inspired drive-by shooting mini-games. With a ton of variety on offer and a huge believable game world to explore, This is Vegas fills a definite gap in the market and should keep you entertained for months to come. Just keep it away from the kids.

You can support Jan by buying This is Vegas