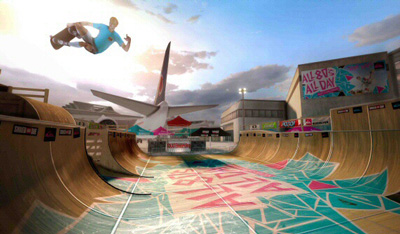 Leading the skateboarding genre into a brave new world, Tony Hawk Ride changes the way you play games by moving your hands off the traditional controller and putting your feet onto a wireless skateboard that looks and feels just like the real thing. With your actions on the board dictating what happens onscreen, Tony Hawk Ride for the Xbox 360, PS3 and Nintendo Wii is a revolution in videogame entertainment that immerses you into the game and living the professional skateboarding dream.

The Tony Hawk skateboarding franchise has gone through a number of changes throughout the years but nothing has been quite as groundbreaking as the premise to Ride. It takes the traditional Tony Hawk game but puts control of the game down to your physical moves and balance on a wireless skateboarding controller. This is truly a next-generation experience and evokes the same feeling the first Rhythm-action games did when they were first released.

This is more than just a simple cash-in on the explosion of plastic controller popular games of recent years. If anything, the controller for Tony Hawk Ride shows the multitude of drum kits and guitars previously produced as cheap plastic imitations compared to the skateboard controller's quality and weight. Though the concept is strange at first - perching on a flat skateboard-like object with no wheels - it's surprising how quickly you get used to it and begin to pull off moves that have any on-looker's whooping and a-hollering. Mostly because of the variety of contorted shapes you end up pulling when you're trying to play the game.

Manipulating the board consists of tilting it to steer, spinning to turn and flipping it up on one end for doing the jumps. There's a raft of infrared sensors on the edge of the board that also measures hand placement - which means you can pull off a good variety of grabs, flicks and other cool skateboarding moves. These sensors also come into play when you push yourself forward by skimming your foot along the floor - all in aid of giving you a sense of really being on a skateboard.

What makes this game work, aside from the tremendous sensors and the board's ability to sense even slight changes in movement, is the range of difficulty levels and how they translate to the game experience. On casual mode it's very easy to get the tricks flying on the screen quickly and with a minimum of fuss. The task of steering the board is slightly taken away from you in this mode which is great as it enables you to get to grips with the nuts and bolts of pulling off moves without having to worry too much about directions. This on-rails training makes the experience of playing Tony Hawk Ride pleasant and accessible to all players. But move the difficulty level up a few notches and you're into hardcore territory that presents a real challenge.

These higher modes push your ability to keep balance. None of the Wii Fit yoga modes will help you here as making sure you have a good centre of gravity, both in and out of the game, is what's most important. It's easy to be in the middle of a few complex moves and then suddenly find yourself on your backside next to the board with your on-screen avatar having done exactly the same. It's a cool level of challenge that makes this game unique and as frustrating as those moments are, you're on your backside only because you screwed up in the game or in real life, not because the game was being unfair.

This level of difficulty is compensated with a less-complex array of gameplay modes. None are particularly deep as the appeal to the Tony Hawk games and Ride in particular is a quick-fire, easy-going experience. There are leaderboards for all courses which help to ramp up the competitive nature of playing with friends and the whole game is easily digestible in two-minute segments - making the game accessible and easy to use for those of all abilities.

It's worth noting that to get the most out of Tony Hawk Ride 360, PS3 and Wii you have to be committed to playing this game as physically as possible. You're able to get only so far by having a perfunctory attitude towards the experience and if you really abhor the idea of leaving your controller on the sofa then it's probably best to stick to Skate 2 or a previous Tony Hawk game. But if you buy this game it takes the genre into new areas and opens up new possibilities for gaming, just like the very first Guitar Hero game did. You'll get bruises and you'll get frustrated at times, but Tony Hawk Ride for Xbox 360, PS3 and Nintendo Wii is a purchase that marks a real advancement in the franchise, the genre, and in videogames - you simply have to try this game out.

You can support Jan by buying Tony Hawk Ride