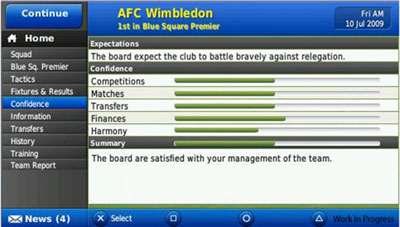 Refining what many considered to be the perfect football manager simulation, Sports Interactive have created another winner with Football Manager 2010 on the PSP. Improvements to the match engine join better feedback from assistant managers and coaches to make this PlayStation Portable game one that will have football fans more than ready for the new season.

When it comes to football management games, there have always been a few big contenders, but with the previous iteration of Football Manager, the 2009 edition, it seemed that a victor had been crowned. However, nothing is ever perfect, and with 2010 comes a few improvements that really make it worth your while buying.

Sticking much more to the core gameplay, this PSP edition of Football Manager 2010 has seen upgrades in the focal areas, instead of bloating it with new features. One of the more fundamental changes that has been made is to the feedback system from assistant coaches, managers and backroom officials. The information they give is now far more detailed and therefore more useful, while still being simple enough to understand. This makes it easier for you to make tactical decisions on who to buy, or who would be better in your current line-up.

That said, not all the information you'll be given is positive. With the new Board Confidence module, players will now have to contend with keeping the Board of Directors happy, while balancing all other aspects of their club management. This report contains financial comments, along with match reports and each member's personal opinion of the signings you have made. They will need to be kept happy if you wish to keep your job.

With a game as stat driven as Football Manager 2010, it is important that it looks good, so it's no bad thing that 2010 has seen a face lift. While it's not been completely renovated - 2009 already looked pretty good - the interface has been cleaned up, and a few tweaks have added a sparkle to the title that wasn't there previously.

The match engine has also seen some work, with improved AI adding to the already rather varied list of player actions. This now allows for what is definitely more realistic reactions to certain match outcomes, as well as other game play elements.

The developers have taken note of irregularities in the previous game, and aspects that were perhaps a little illogical. No longer will managers find themselves unable to pay wages of a free transfer signing, while having money left over in the transfer budget. Now players have far more control over their funds, and can move it around, allocating it to whatever they see fit.

For me, the joy of playing Football Manager 2010 on the PSP, is that it is so fully featured, while focusing on the basics. It does away with the bloat found in other management titles on other platforms, and using simple text gives you all the information you need to rise to the top of the league - should your skills permit it.

What Football Manager 2010 has done so well is stick to its roots. Taking the core experience that delighted management fans, the developers have tweaked and refined the game play. Football Manager 2009 has been supplanted as the top football based, portable management title; the 2010 edition is now the king.

You can support Jan by buying Football Manager 2010