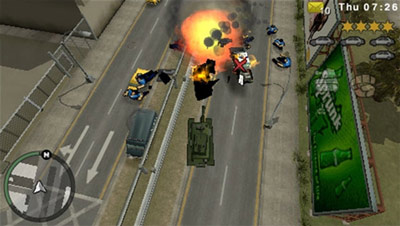 Grand Theft Auto: Chinatown Wars for the PSP perfectly replicates Liberty City for Sony's handheld and follows the story of a young Triad, Yuang Lee, who comes to the city after the mysterious death of his father. The epic nature of Grand Theft Auto is delivered in an exciting tale on the PlayStation Portable which uncovers the truth behind the crime and corruption of the Triad crime syndicate. Taking full advantage of the PSP platform this is an impressive version of Chinatown Wars.

Navigating the streets of Liberty City from the convenience of the PSP has never felt so good with Chinatown Wars. The already critically-acclaimed game on the Nintendo DS has been enhanced for the PlayStation Portable and gives you an incredible experience of playing within the world of Grand Theft Auto 4. This version of the game has been built specifically to take advantage of the PSP hardware with improved lighting, up-scaled wide-screen graphics and better animation. The result is an experience a lot like going from standard TV to High-Def.

The story focuses on Yuang Lee, a spoilt young member of the Chinese Triad syndicate who comes to Liberty City after the murder of his father in Hong Kong. It's a fascinating tale and one that's utterly addictive to play with the natural controls and impressive visuals. More than any other GTA game on a handheld, Chinatown Wars portrays the city it's set in with aplomb and character. Rather than going for a strictly realistic look Liberty City is shown off in a cel-shaded, cartoon style that oddly fits right in to the story.

The top-down viewpoint gives it a retro feel, harking back to the very first GTA games on the PC. Far from making Theft Auto: Chinatown Wars feel old or clunky, this approach means you have complete control over your character, whether that's running and gunning on foot or being involved in car-chases from borough to borough. This level of accessibility shows that the game has been designed specifically for a handheld experience and the ease with which you can move between the gameplay sections is tremendous.

This is carried over into the very structure of the missions themselves. These are usually long and winding affairs on the main consoles, but Chinatown Wars on the PlayStation Portable has wisely crafted smaller, bite-sized missions that rarely go beyond the ten-minute mark. Perfect for playing on the go and mean you get a feeling of progression even if you play for only half an hour. That doesn't mean the game lacks any kind of depth. With four of the five boroughs of Liberty City from Grand Theft Auto 4 present, the city is just as much a living and breathing entity than in the major console game.

I found the mini-games and the in-game economy really intriguing. Uncomfortable for some, this black market economy for illegal drugs was a fascinating part of the experience. Gaming the market and making sure I had enough of the right kind of drug to complete a deal before getting caught was a real rush. Just as immersive were the small mini-games that filled certain gameplay sections with a bit more depth. Hot wiring cars, street races and Rampage missions all serve to entertain and extend the life of an already packed gaming experience.

With new music, side-missions and a new character - journalist Melanie Mallard - Chinatown Wars on the PSP is a breathtaking game for Sony's handheld. Even if you've already played the DS version of the game this is still an incredible experience with some vast improvements to take advantage of the hardware. Nothing captures the essence of the Grand Theft Auto franchise with the same confidence and variety than Chinatown Wars. Don't be put off by the art style or the platform it's on - this is a gaming masterpiece to be enjoyed by all.