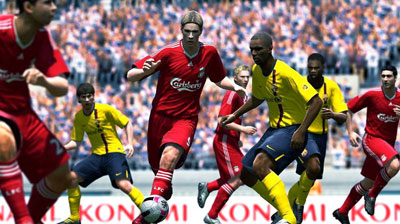 Experience the true pace of the beautiful game with Pro Evolution Soccer 2010 for the PSP. This is the only football title on the mobile console to feature correctly triangulated passes, high speed off-the-ball runs and an in depth tactical system. After listening to the feedback PES 2010 benefits from various changes. The biggest of these is the 360-degree control that allows players to spread the ball with ease using the analogue nub, opening up new attacking and defensive possibilities.

There are several football franchises that have a refresh each season, but Pro Evo is known for its fast paced action and attention to the detail of the sport. This year the PSP console has seen some interesting feature additions that should attract fans of this series as well as newcomers.

One of the fancy new additions of Pro Evolution Soccer 2010 is the inclusion of individual player key skills. These take into account the real life strengths of certain players, and give them a named attribute that allows players to use them during the game. Torres for example, who's visage graces the box cover, is renowned for his ability to pick up far flung passes in the penalty area, as well as dropping the ball to team mates in good positions for scoring opportunities, in PES 2010 playing as Torres you can do just that - magic.

These skills are extended from individual players too, so the become team based tactics that can be switched mid-game. Liverpool can make use of sophisticated play and high attack numbers to press the midfield with a powerful defence line. Just as easily though, they can instantly switch over to a more offensive strategy and see the AI controlled players move to the back of your opponent's defensive line, creating much more varied pass opportunities, and adding to the tension of the defending team.

Another improvement to PES 2010 is the development of the interaction between UK, and EU play. Now you can play through a straight season in the Premier League, eventually graduating to the Europa and Champions leagues, if they place high enough. This not only allows you to take on more varied opponents, but also means you can get your club's name into the hearts and minds of European players and attract young transfers.

This PSP video game has seen some real development in controlling the players individually too. Beyond team and single player tactics, you can now make use of much faster off-the-ball runs, along with triangulated passes to keep pushing the defence of your opponents, and while keeping them under pressure, aim right for the net.

For me Pro Evolution Soccer 2010 is fantastic for its speed alone. Players move at a break neck pace as they dance around the field, on and off the ball. Coordinating your team can be a real challenge but now with team tactics, this becomes far more intuitive and with the AI tweaks this title has seen, players should have no problem dominating them opponents in the UK or Europe.

When it comes down to it, there's no better way to bring glory home to the UK than making your team the number one in the country, and taking the fight to Europe. Pro Evo 2010 lets you do that and gives you the tools to make it happen, in the way of faster game play, player skills and improved team tactics. There really is no better way to enjoy a game of handheld football than with this game; this one's a must have for any PSP gamer.

You can support Jan by buying Pro Evolution Soccer 2010