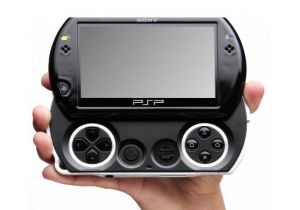 The PSP Go is a stunning new version of the PSP series of handhelds. Smaller than the PSP 3000, the new stylish and modern design includes a sliding display that puts it on a technological par with Apple's iPhone and iPod Touch. The PlayStation Portable Go system is designed for the modern lifestyle with all content available for download over the PlayStation Network. This is the first step in the digital revolution and with top games like LittleBigPlanet, Gran Turismo and Motorstorm available, this is a must-buy for all gaming enthusiasts.

With its slick slide-out display screen, the PSP Go is a compelling reason to own one of Sony's new handheld devices. High end Xbox 360 and PlayStation 3 console owners are likely to be won over from the portable dominance of the Nintendo DS and DSi. Although the PSP Go is smaller than the previous iterations - PSP-1000, PSP-2000 and PSP-3000 - it packs features that set it apart from all other systems with its 16GB internal memory and ultra-portable status. The slimmer size and lightweight nature make the Go more pocket friendly than the PSP-3000. The crisp 3.8 inch screen also gives everything a much cleaner look than before.

The most major advance in this new piece of hardware is that all content is obtained over the PlayStation Network. Games, TV shows and Movies can all be bought on the console and directly transferred to the internal memory or an external Memory card. This is an extraordinary revolution in the way you can access content, with no UMD's, no packaging and no need to go to a retailer to acquire content.

The PSP Go is a forward-thinking move that sets the standard for portable hardware. The convenience of having all the games and movies you want with you on the go, and without having to swap out, is impressive. Then there is the ability to access your PlayStation 3 over Wi-fi or Internet connection which enables you to play games, watch PlayTV and access files on the home console.

For a new distribution platform the amount of content available is impressive from day one. A large number of games are on the PlayStation Network for immediate download - ranging from new titles such as Need for Speed: Shift and FIFA 10 to the classic God of War: Chains of Olympus. The PSP Go is also a great platform for playing PlayStation 1 (PS1) games which are also available to download.

It also comes with Bluetooth tethering capabilities, meaning the PSP Go can connect to other Internet enabled devices and access the Web anywhere. As the Dualshock & Sixaxis controllers for the PlayStation 3 are Bluetooth devices, it also means you can play games using a standard pad if you wish. But more usefully it means you can tether a Bluetooth headset for online games such as Socom: Fireteam Bravo, or even a Bluetooth keyboard for easier Internet browsing.

I've really been enjoying the new games I can access via the PSP Go. As well as being able to download full retail titles, PSN also offers a new game format - minis. These are smaller, iPhone and iPod Touch like games that are cheaper and quicker to download on the store. At launch the classic Tetris is available and other excellent games like Hero of Sparta, BreakQuest and Fieldrunners have already made their way onto my PSP Go.

The improvement from the PSP-3000 doesn't just stop with its looks and the product distribution model - its also much easier to physically use. Playing Gran Turismo for over two hours would usually result in some serious hand cramp if I used the older systems but the Go has altered the button layout to be much more intuitive for longer play sessions. And what's more this is provided as a time limited free download for early adopters like me.

This evolution of the PSP might not be to everyone's taste. The lack of a UMD drive might put people off but with the future of gaming heading towards a downloadable digital format, this is an excellent moment to jump aboard the revolution. With Sony's promise of providing a route to upload UMD PSP games onto the PSP GO, the sliding display and new form-factor, this is desirable hardware from the start. Add in the wireless connectivity to the PlayStation Store along with the new games and the PlayStation Portable Go is a worthy and compelling purchase.

You can support Jan by buying PSP Go