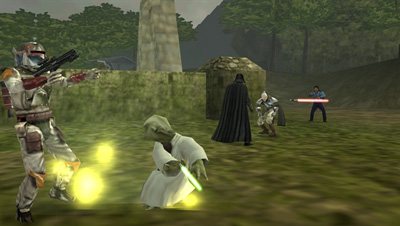 Star Wars Battlefront: Elite Squadron is the latest in the Battlefront series of Star Wars games for the PSP. Enabling you to fight on multi-level battlegrounds, players can take control of ground troops, commandeer a vehicle or engage in some explosive dogfighting in space. With the ability to land and take the fight to the enemy on capitol starships, Elite Squadron features a deep and engrossing single player campaign that spans the entire Star Wars saga and is an essential experience for all Star Wars fans.

Letting you assume the identity of X2, a clone trooper created from the DNA of a Jedi Master, Star Wars Battlefront: Elite Squadron for the PSP pits you against your evil twin brother in a classic Rebellion versus Empire storyline. The great part to this set-up is you can experience both the nuances of tactical command and also wield some impressive force powers yourself.

Elite Squadron goes beyond the previous instalments in the series by offering an impressive array of customisation options in the game. You can change nearly every aspect of your character - from their species and appearance to any particular combination of weapons and armour you desire. These features make Elite Squadron the most customisable Star Wars Battlefront game ever created.

The story itself sheds light on many of the battles from the Star Wars movies and makes for an impressive experience - especially when you're viewing these from the perspective of a ground-level soldier or Jedi Master. You'll lead missions to recover the plans to the Death Star and then later provide cover for the Alliance troops as they evacuate from Empire forces on Hoth. The chance to play a part in some of these big events from the movies gives Elite Squadron a certain amount of weight and depth that makes it great fun to play through.

In terms of gameplay, Elite Squadron is the most ambitious title yet on the PSP. The scale of the battles has been expanded to include objectives both in space and on the ground. These missions can see you switching between turret positions, commandeering X-Wings, boarding battlecrusiers and finally destroying enemy ships by using their own weapons against them. This style of mission really helps to marry the atmosphere of the Star Wars license with some impressive set-pieces that draw you completely into the action.

This is all good stuff in single-player mode but Elite Squadron excels when it comes to the 16-player multiplayer. One of the best modes to play is Conquest. Here the two factions fight to be first to reach a point goal and the scale of an eight versus eight match with computer bots adding more players to the battle really conveys an epic sense of a warzone. Seeing blaster shots flying across the scene and attempting to board and take down the enemy’s capitol ship gives you such a buzz when it’s against real players.

The atmosphere created by Star Wars Battlefront: Elite Squadron is what gave me my most memorable moments with the game. Hearing that Tie Fighter screech, the blaster bolts and the lightsaber buzz all worked to create a tremendous feeling. The ability to go from ground assaults to space combat gave me more of a sense of place than the previous Battlefront games and made these missions feel so much more epic than before.

Star Wars Battlefront: Elite Squadron for the PSP is the perfect evolution of the Battlefront series. The battles feel larger and more epic, with the eight versus eight multiplayer shining through as the game's best and most enjoyable feature. There's a wealth of customisable content here and a variety of famous characters to play as well - so if you're a fan of Star Wars and the Battlefront series then Elite Squadron has to be on your list to play.