A Boy and His Blob Wii Guide

A Boy and His Blob Nintendo Wii 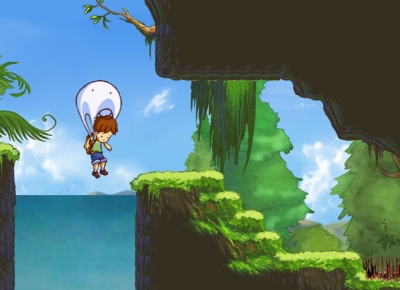 A Boy and his Blob may sound like a rather unusual name for a game, but it represents an NES classic that rewrote the platform game handbook. A Boy and his Blob returns here on the Nintendo Wii console with a whole new bag of tricks, quite literally. The player has a bag of Jelly beans which they feed to the amorphous Blob-friend and watch him transform into useful objects to solve puzzles and escape danger. Action, puzzles and cartoon graphics combine to offer another unique experience on the Nintendo Wii.

A Boy and his Blob on the Wii creates the same mix of platforming and puzzles as it did back in the 80's on the Nintendo Entertainment System (NES). But rather than the intricate mind bending of other adventure titles, here the emphasis is on sheer variety. Hundreds of different flavoured jelly beans can be fed to the Blob and turn him into a range of different objects - from trampolines to ladders to holes in the fabric of reality - really! It is this wide variety of options that lets players use their imagination to solve the platforming conundrums and progress.

Although the puzzle solving objects are accessed by feeding rather than typing, this is not a million miles away from Scribblenauts. Both games offer everyday problems that have to be solved with similarly everyday objects. The skill of course is identifying which objects are best for each situation, something that in turn mirrors the one word association gameplay of the WarioWare games.

The Nintendo Wii version of A Boy and his Blob continues the same emotive connection between two friends. Experienced players will enjoy a return to the leader-helper relationship of ICO on the PlayStation 2. There is something compelling about helping an on-screen partnership through its ups and downs. And as was true in ICO, so too in A Boy and his Blob - at different times both characters take the lead and prove invaluable.

The game understands this three-way relationship well - player, boy and blob - and makes good use of it to drive the main story even if it does sound a tad childish at times. In the opening scenes we learn that Blobolonia is threatened by an evil emperor, so the blob comes to earth looking for help. Unknowingly he decides his best bet is this young boy. Although this seems to be a big mistake, the boy's imagination and creativity turn out to be just what is needed to save the day.

I wasn't sure how my family would take to playing a game with such tight puzzle solving elements, we usually opt for games we can all play simultaneously. However, the amiable nature of the characters combined with the novel feeding and metamorphosing play mechanic soon had my kids and wife hooked. Although largely one player, it's a great game to play in a group as everyone gets involved in the puzzle solving suggestions. 'No, not lime, you need a banana bean' and suchlike then rings out as play progresses.

This A Boy and his Blob sequel could have been a big mistake. To return to such a classic title and make it work on the Nintendo Wii hardware is no easy task. Combine this with the new casual audience who hasn't necessarily played the original is a big ask. Happily though, the genius of the original idea shines through. Players new and experienced will find it hard not to fall in love with this dynamic partnership all over again. Who needs Batman and Robin when you have Boy and his Blob.

You can support Jan by buying A Boy and His Blob