It's My Circus Wii Guide

It's My Circus Nintendo Wii 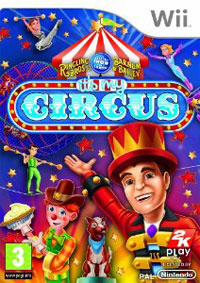 It's My Circus Wii brings varied Circus antics into the living room. 40 circus games and 12 multiplayer modes sometimes lack the fidelity and expertise of Wii Sports Resort, but Circus Games still has enough family-targeted material to keep the game fun and entertaining for many hours.

If you've ever harboured a secret dream to run away to the circus then It's My Circus lets you fulfil that slightly worrying fantasy to the max. As a sequel to the highly successful Carnival Games, It's My Circus features over 40 different games across the whole spectrum of circus events using the Wii's motion controls to the full. These minigames cover a huge variety of events from becoming the human cannonball to simple pie-throwing fights and tightrope walking skill games - all under the guise of training you to become the best circus performer of the lot.

Though titles like Carnival Games for Nintendo Wii attract lot of criticism for being nothing more than a collection of vacuous mini-games, many casual players enjoy the pick up and play nature of these titles. It's My Circus operates in much the same way and serves as an easy progression from Wii Play or Wii Sports.

It uses the Wii-mote and Nun-chuck for most of the games on offer and what families will enjoy the most is the amount of variety on offer. Out of the 40 games you're guaranteed to find several that everyone in the family will enjoy playing together or against each other. There's also a sense of progression within the main game thanks to the presence of unlockable rewards and the option to customise certain elements.

As a party title that'll entertain all ages and involve the whole family, It's My Circus will fulfil its purpose.

Though this variety is great in single player it's obvious that the game is best experienced in multiplayer; up to four players can go up against friends and family across 12 events and this part of the game is where you'll get the most enjoyment. As shallow as some of these minigames are it's usually compensated by the sheer rivalry that even the most perfunctory of minigames encourage. It's my Circus is just like Carnival Games in this regard as many of the events are paper-thin when examined closely or played in single-player. However, add three family members and the game evolves into a fierce competition to be the best performer in the Circus.

A lot of this entertainment is generated by the player participation but It's My Circus does a great job of letting you get straight into the action with the minimum of fuss. A nice touch is the inclusion of Balance Board events that test your agility much more than the other minigames will do.

It facilitates fun and entertainment with a room full of friends or family.

With such a number of minigames included in the package It's My Circus offers great value as a budget title. It doesn't come with the graphical quality or responsive controls that more expensive Wii titles can offer, but it facilitates fun and entertainment with a room full of friends or family. The unlockable in-game prizes and customisation options add a lot more personality to the title than you might expect and as a result, It's My Circus manages to keep the boredom of a typical minigame collection at bay.

It may not win any prizes for originality or compelling game play, but as a party title that'll entertain all ages and involve the whole family, It's My Circus will fulfil its purpose. If you're looking for a cheap game that'll keep kids occupied for a few hours or need a game for parties or social gatherings then this is an excellent and cheap choice.

You can support Jan by buying It's My Circus