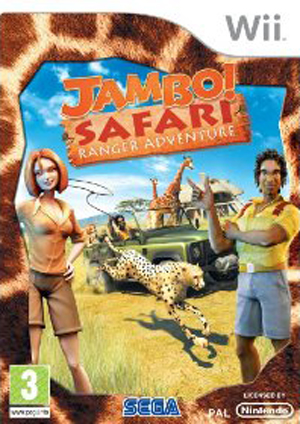 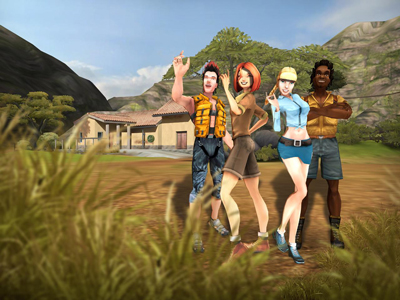 Jambo Safari for Nintendo Wii takes you on an exciting journey through the African Plains with the aim of becoming a fully qualified ranger within the game. High-speed challenges and thrilling rescue missions combine with the excitement of driving the licensed Land Rover Defender vehicles, giving players the ultimate ranger experience. With a vast array of missions to keep you entertained ranging from wildlife photography to hot air balloon rides, Jambo Safari will take you on a fantastic personal journey into the wilds of Africa.

This new Jambo Safari game for Nintendo Wii is one of the most ambitious games targeted towards children that you'll see this generation. Replicating the African Safari is no small feat and Jambo Safari does an excellent job of giving the game an authentic look and feel of those fascinating wilds.

Starting at the beginning you'll choose one of four characters to play as in the game. These characters are all nicely distinct although it would have been nice to have the option to make a unique character of your own. From here the game sets you down at the ranch and gives you a short tutorial about how to play and control Jambo Safari. Driving around this home base was quite fun and finding the My Place area allayed my disappointment with the character selection as you can customise your ranger and the vehicle with new clothes and parts.

Venturing into the Plains from the ranch is a pretty awesome experience as the game opens up to be almost endlessly free-roaming. The Plains are divided into sections which need to be unlocked before entering but the size and variety of these individual sections conveys a hot and sunny Africa quite well.

In these open-world areas there's a decent amount of variety to the missions. The first sees you capturing an animal by using the Wii-Remote. Twirling it and then acting out a throwing motion whilst pressing B to reel it in is effective in giving you the feeling of lassoing these animals. The motion controls aren't necessary on easy mode which is a nice touch for younger players who haven't yet got to grips with the Wii's controls.

Other missions include taking photographs of particular animals, participating in Land Rover races, rescuing sick animals and progressing on the path to becoming a fully-fledged Park Ranger. These all offer a decent amount of variety and the game never falls into the trap of repeating mission’s unnecessarily.

The party mode offers a bit of multiplayer action and is good fun when you want to take a break from the main game. Up to four players can take part in Ostrich Racing and Meerkat Madness which are just as hectic and crazy as they sound.

Although my kids enjoyed the main part of Jambo Safari quite a lot, I was surprised to see that their favourite section was the capturing of sick animals and helping them get better in the enclosure pen. Here the game explains a bit about the animals you're helping and it added a touch of educational material that wasn't overly 'teachy' and benefitted the overall experience. The racing sections were another favourite although it doesn't compare to a dedicated racing game.

Jambo Safari for the Nintendo Wii does an excellent job of translating the big sky adventures of the African Plains to the home console. It's a lot of fun driving the Land Rover across the wilds and participating in all the missions. Its slight educational moments are well implemented and the variety of animals and jobs you can do keeps the experience fresh and interesting. Although adults might find aspects of the game slightly boring, Jambo Safari is targeted at kids and it’s easy to see that they are going to be entertained for hours.

You can support Jan by buying Jambo Safari