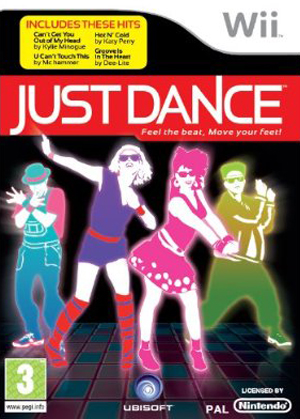 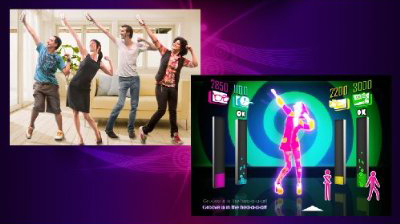 Just Dance for Nintendo Wii lets you enjoy the thrill and energetic nature of dancing in this intense party experience. Follow the moves of a variety of dancing coaches all dressed accordingly to the songs playing and learn iconic dance routines on the way to improving your abilities as a dancer. With the opportunity to play with up to four friends you'll be able to challenge them for domination of the dance floor, adding your own style to moves and mixing it up professional-style. Just Dance is the ultimate game to break the ice, loosen the clothing and get the party started!

Thanks to the Wii changing the demographic of videogame players to include a much more casual audience, games like High School Musical 3, Wii Fit and We Cheer have been released to capitalise on this new direction. Just Dance continues that same feeling and dispenses with any challenging career mode or complex controls to ensure the most casual player can pick up the Wii remote and get into the game.

Just Dance's premise is very simple as you just follow the onscreen dancing instructor as a variety of classic or modern pop hits blast out from the TV speakers. It's a good range of songs too, and they all fit in with what you'd want to play at the middling-drunk phase to a party when everybody's a little too merry to care about precise controls or progressing through a story.

That might sound a little derogatory towards the game and it’s true that Just Dance lacks the polish or compelling single-player mode that makes High School Musical 3 so fun to play. The way the game registers your movement feels completely random and you're never sure exactly how the game is scoring your moves or whether it’s just shoving points at you to make you feel good about yourself.

It's hard not to overstate how deep the strategy of this DS game can get. The variety of units within a single race is large and the number of unique experiences you can have when playing this game - according to your play style - makes it one of the most enjoyable strategy games on the platform.

The game presents itself very simply with a bar representing each players score and a silhouette of a dancer guiding you through the moves. This silhouette will change according to the song you've selected so you'll get a funky fitness girl for many of the Deee-Lite or Cyndi Lauper tracks - whereas picking MC Hammer will net you a pretty cool dude (if it was the 80's) to guide you through some hip-hip moves.

There's just a few multiplayer modes present - quick play and challenge - offering almost identical experiences and a warm-up option to slowly get things started. Single-player isn't catered for at all so it’s clear that this is a game best played with a bunch of people, whether at a party or at a family event.

The distinction of party game is important to make in order to judge the game correctly. It might not stand up to traditional game criticism but Just Dance is a game for people who just want to have a bit of fun in front of their TV at special occasions. In this regard I found the game nothing less than a success, both as a game with friends at a party and also as a family gaming medium. It might not have the fidelity of We Cheer or High School Musical 3, which remains a firm family favourite, but once you get into just having fun the game takes on a different class.

There's nothing quite like larking around to 'You Can't Touch This' or Red Nex's 'Cotton-eye Joy' and the way the game is a little esoteric in its scoring system means the overbearing urge of competitiveness is kept at bay. It becomes all about just enjoying yourself and the funny animation of the instructor, leads the way in getting you in the mood for some hilarious fun.

Just Dance for Nintendo Wii isn't the most polished or coherent party or family game to grace the console. But if you can look past the presentation and lack of single-player then there's a lot to keep the right kind of crowd entertained. For parties or family events where taking videogames as a casual experience matters the most, then Just Dance will see everyone jumping in and having a good time.

You can support Jan by buying Just Dance