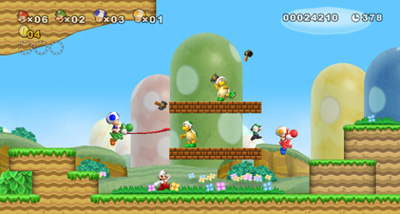 Following up the excellent New Super Mario Brothers on the Nintendo DS, this is the Wii console version. The same innovative approach has been applied to the classic Super Mario Brothers side scrolling platform game. Whereas the DS console version updated visuals and weapons, the focus here turns to co-operative and competitive four player action in a plethora of modes that draw on the chaos from the previous Wii game Super Smash Brothers Brawl. Players of all ages and abilities will enjoy playing.

New Super Mario Brothers on the Nintendo Wii console takes the classic left to right platform formula and applies the Wii consoles modern technology to bring it up to date. This means super sized enemies and Mario powers, new screen shaking abilities as well as four player simultaneous play. New items this time around include the hilarious flying Propeller Suit, the ice shooting Penguin Suit and a reappearance for a ride-able Yoshi.

Each player uses a Wii-mote in sideways NES style. They can then work together to complete a level, or compete to see who has the highest score at the finish line show down. Here, rankings are awarded on the basis of how many enemies have been defeated, coins collected, and total points scored. Players that fall foul along the way can be let back in to the action by those left in, or left hanging in their bubble until they finally timeout and reappear.

Whilst not as visually stimulating as Mario Galaxy on the Wii, or as mind bending-ly complex as Braid on the Xbox 360, the multiplayer simplicity of New Super Mario Brothers Wii is their trump card. This not only gives the game enough screen space to accommodate more players at one time, but also gives rise to all sorts of devious tactics as players work to gain an advantage over their adversaries - whether this is the on screen enemies or their competitive comrades in real life.

A nice touch is the ability to interact directly with the other players. This works both ways. Players can save each other from fatal falls - like the computer controlled saves of Erika in Prince of Persia - or they can throw each other sprawling into more danger.

Although this doesn't sounds like a hugely innovative game the proof of the pudding is in the playing - and it is just so much fun. Nintendo here do what they do best, take a simple idea and create a hundred different reasons to enjoy it. New Super Mario Brothers could have been a marketing cash cow, but instead it creates a whole new way to enjoy the Mario universe - and one that reflects Nintendo's play together ethos.

I'd never managed to entice anyone into watching me play Super Mario Brothers, not since playing in my youth at our local arcade. The multiplayer aspect of New Super Mario Brothers, for me, recreates this collaborative aspect I'd been missing. Not only do you get to play with four friends, but you also instinctively work together to collect all the power ups and boss each level. Genius!

New Super Mario Brothers on the Nintendo Wii console turns its back on high end visuals and controller novelties. But rather than a retrograde step this is all for the good. The fun of a well put together simple idea shows how quickly we forget what's important in a good game. Thankfully it seems Nintendo were taking detailed notes all those years ago. Here, they prove they remember perfectly what it takes to make a great platform game.

You can support Jan by buying New Super Mario Brothers