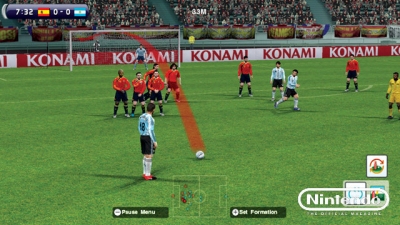 PES 2010 on the Nintendo Wii continues its reputation for creating the most innovative video game football. This sequel to the well received Pro Evolution 2009 continues the point and play features and strong visuals. New this year is a Wii-mote only control method ideal for newcomers and novices. Hardcore gamers are well catered for with Champions, Master and Europa leagues. The number of teams has also been expanded to take in European clubs like Sparta Prague, Wisla Krakow and Lokomotiv Moscow.

Konami and EA have both been working hard to create an appropriate and successful football experience on the Nintendo Wii. For both developers that has meant dedicated development teams and the creation of a game that is distinct from the 360 and PS3 versions.

While FIFA has gone down the casual gamer route with their cartoon like visuals and simplified controls, PES has taken things in the opposite direction - and with more success. FIFA makes things easier by enabling players to pass and shoot with Wii-mote and Nun-chuck gestures. PES focuses things on the greater nuance that comes from the Wii-mote's pointing ability.

Pro Evolution plays very differently to its Xbox 360, PlayStation 3 and PS2 counterparts. Rather than controlling every kick directly, players direct the action with the Wii-mote. This enables you to send players on runs to receive a ball, or leave the computer to head down the wing with the ball while you get ready to recieve the cross in the centre. It's a control scheme that is difficult to describe but instinctive to play.

Those that prefer a more traditional approach can reach for their Classic-controllers, or use just the Wii-mote held horizontally. This certainly makes things less daunting to newcomers while easing them slowly to the game. Experts should expect to spend a good 30 minutes learning the controls before they will be able to get the most out of them. But any review will tell you that this is missing the real genius of the point and play mechanic that PES on the Wii has become famous for.

Perhaps the only disappointment this year is that, after the leaps and bounds forward in PES 2009 on the Wii, the controls are untouched this time around. What I'd really like to have seen is the inclusion of MotionPlus support to complement the already nuanced pointing. This could have turned a well executed idea into something really magical. But while PES 2010 plays essentially the same as the previous game, this is no bad thing that being such a strong experience.

General visuals and player movement have received a bump though. This year things look that little bit tighter, which is essential for the complex tactics the control schemes enable you to employ. The rosters have received the usual update and edge closer to that fully licensed product that PES fans dream about.

I thoroughly enjoyed playing PES, inviting three friends over for a session, ensuring I had a large TV setup with component cables for that optimum experience. Although at first some of us, more used to the dual analogue sticks of the 360 and PS3, were a little skeptical it wasn't long before things clicked into place. The larger screen was key, we agreed, as the level of detail necessary to control players with the Wii-mote point and play controls was higher than traditional methods. But this is testament to just how revolutionary a game PES 2010 is on the Nintendo Wii as much as anything else.

With FIFA earning such a strong following on the 360, PS3 and PS2 it's good to see Pro Evolution earning a new set of fans on the Nintendo Wii. Although the improvements are incremental this time around, with a nod to some simpler controls for casual players, the game continues to innovate and grow. For anyone looking for serious football fun on the Wii this is the place to look, in fact many fans from the HD consoles could do worse than spend an evening with this Wii version. It's a game that punches way above its weight and holds its own.

You can support Jan by buying PES 2010