Tales Of Symphonia: Dawn of a New Age Wii Guide

Tales Of Symphonia: Dawn of a New Age Nintendo Wii 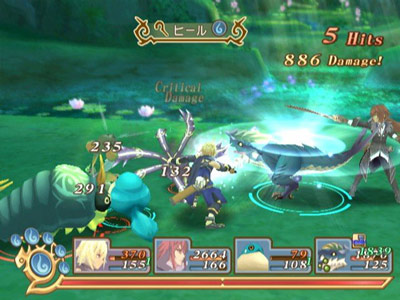 Set two years after the original Tales of Symphonia game for Gamecube, the sequel Tales of Symphonia: Dawn of a New Age for the Nintendo Wii continues the traditional Japanese Role-playing series in classic fashion. Acting as both a spin-off and as a sequel to the first game, Dawn of a New Age brings a less cartoony art style and more sophisticated characters to the Wii. With improved cut-scenes and the same satisfying gameplay, the Tales series continues in strong fashion with strong visuals and excellent gameplay.

Tales of Symphonia: Dawn of a New Age feels like the perfect sequel for fans of the Tales series and especially those who loved the original Gamecube game. As a direct continuation of the 2004 hit, Dawn of a New Age on the Wii picks up two years after that game's conclusion with the two worlds of the Tethe'allans and the Sylvaranti still merged together. In the intervening two years, war has broken out between the two former worlds and in the midst of a brutal massacre, Emil Castagnier is forced to watch the murder of both his parents. Playing as Emil after this terrible event you team up with Marta, a girl being hunted by the Vanguard, and begin your quest for revenge and to restore the world to rights.

This epic premise and opening cut-scene sets the tone for the game and it's a much more sophisticated and grown up affair than previous Tales games. Whilst the beginning of the game is a little slowly to get going than you might think, once it gets over this initial hump the pacing of the story clips along in a compelling fashion. Even if you've not playing the original Gamecube game Dawn of a New Age still has a rounded story to pull you into its world and characters.

But if you've played Tales of Symphonia before then you'll love the familiar faces that begin to make an appearance as the game goes on. This helps to build a sense of depth to the world and story, giving history to an already immersive title and giving credence to the emotional themes that get brought up in the narrative.

The strong visuals of Dawn of a New Age continue the Tale's tradition with a distinct look and feel that sets it apart from most other RPGs. The intense cell-shaded look has been toned down a little for this game but it still has an arresting power and beauty similar to that of Eternal Sonata on the Xbox360 and PS3. The vibrant colours really show off the fact that the Wii is capable of some tremendous visuals and it's a testament to their quality that you sometimes forget what system you're playing on.

As for the combat, it's a pleasing blend of both the more recent Tales of Vesperia and the original Tales of Symphonia. The battle system is in real-time and you've got full 360 degree control over the characters, making combat situations a bit more dynamic and freeform than the original game. It's a reassuringly button-mashy experience which I enjoyed immensely, but the biggest change comes with a fantastic monster-recruiting minigame. Tapping into that compulsive Pokemon experience of collecting monsters is what made Tales of Symphonia: Dawn of a New World such a wonderful RPG and helped me to gain a winning advantage in combat. The monsters you recruit will always stay with you, levelling up and getting stronger all the time and it's this aspect of the game that kept me coming back for more, long after the campaign had been completed.

For those who are long-time Tales fans then Tales of Symphonia: Dawn of a New World for the Nintendo Wii is an unquestionable purchase. It continues the excellent tradition laid down by the previous games and takes the series into slightly darker territory in regard to its story. But newcomers shouldn't be put off as this is the most accessible Tales game available to play. It's enjoyable, moving, visually arresting and with over thirty hours of gameplay it's a fantastic way to get into the Tales series.

You can support Jan by buying Tales Of Symphonia: Dawn of a New Age