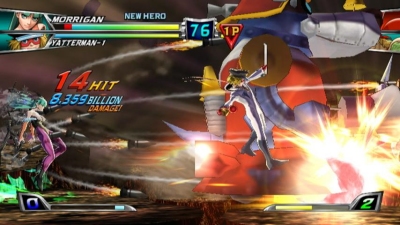 Tatsunoko vs. Capcom: Ultimate All-Stars is a fighting game featuring well known characters from both the anime powerhouse Tatsunoko, and the Capcom history of classic games - including Street Fighter, Darkstalkers and Mega Man Legends. Taking playable characters from all eras of both long standing gaming and animation studios gives a wonderfully in-depth roster of over 20 combatants to choose from when taking on the game itself, or a human counterpart.

Tatsunoko vs. Capcom: Ultimate All-Stars on the Nintendo Wii is a sequel of the 2008 game. Now though, it includes new characters, tag team play as well as adding support for a tonne of third party peripherals, such as the specialised controller for this game, the Tatusnoko vs Capcom arcade stick. This gives different avenues of play, while updating the roster gives players more than 20 different fighters to choose from.

This version of the game focuses on the Wii console's more casual market. Tatsunoko vs. Capcom: Ultimate All-Stars adds multiple levels of depth, allowing new and novice players to pick up and play instantly, but also ensuring more experienced players can still delve deeper and find a play style all of their own, not least by mastering some of the more complicated moves.

Those who wish to spend time learning the advanced combat mechanics of Tatsunoko vs. Capcom: Ultimate All-Stars can do so with attacks that range from the impressive Aerial Rave air combos, Delayed Hyper combinations, Mega Crash defensive moves, to the more technical Assault Attacks and the Baroque extended combo system.

Each character also has a unique move set, and accordingly play differently from each other. This makes for a completely alternate game experience every time you play through with a new character.

Those without the time or inclination to dive in the deep end of Tatsunoko vs. Capcom: Ultimate All-Stars can use the simpler (and default) four button control scheme. This provides plenty of scope for those wanting to jump in and perform some great looking combination attacks without too much skill. Although they will never be a match for more experienced players it certainly provides an easy way into the genre for newcomers and younger players.

For me, being able to pick characters from older games was great. Taking my chosen fighter and pitting him or her up against legends from not only Capcom's long list of fantastic games, but those from the historical animations of Tatsunoko. The fact that I was able to craft my own play style using my character's unique move set was also a real winner in my book.

There are plenty of fighting titles out there, and versus games aren't new, but combining two franchises that have a long standing and loyal audience in this way is a great idea. It becomes hard to deny yourself the unadulterated pleasure of teaching those animations what Street Fighter is all about.

You can support Jan by buying Tatsunoko vs. Capcom: Ultimate All-Stars