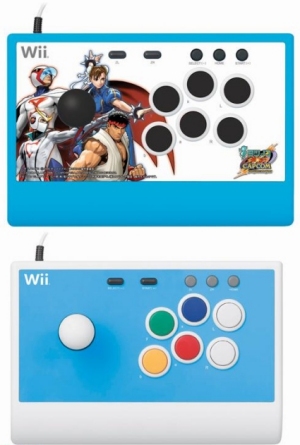 This is the companion arcade stick controller for the Tatsunoko vs Capcom game on the Wii console. This double exclusive for Nintendo, of both peripheral and game, shows their ongoing commitment to the hardcore. It features a customised decal layout with some of the franchise's better known characters, as well as incorporating traditional Japanese arcade game styling in both buttons and stick to make the experience as authentic as possible. Not only is the build quality top notch but the ergonomic design will suite both new-comers and the muscle-memory of arcade old timers.

Controllers from different consoles, be they Xbox 360, PlayStation 3 or Wii, tend to be quite multi-purpose with extensive button layouts and plenty of omni-directional sticks to make them work with a variety of games. However if games like Guitar Hero have shown us anything, specially manufactured controllers can often give a much more enjoyable experience.

To allow players to reminisce fully, Nintendo have utilised a 'cherry top' controller stick which were utilised almost exclusively in the Japanese sit down cabinets. Not only this, but the buttons have a near flat surface, with a slight leaning towards the convex, to provide that truly authentic arcade feel. All buttons and the stick are made of a smooth, glossy plastic which looks fantastic alongside the character portraits located around the controller; all backed in white to offset the black controls.

The base of the unit is a sky blue which while not exactly being the manliest colour around, does fit with the Wii console's younger, and more casual ethos, while fitting in nicely with the aesthetics of most surfaces that you would happen to play on.

The base of the unit is thinner than standard arcade controllers and with a sloped front end to make it easy going on the wrist. Nintendo does a good job of mirroring the plus points of traditional controllers while taking into account modern day knowledge of ergonomics to improve user comfort. Also, on the underside are several well place rubber feet to stop the controller from making the rounds across whatever surface you're playing on.

The Tatsunoko Vs Capcom arcade stick is functionally easy to work with, as it plugs straight into your Wii-mote, meaning you can use it effectively wirelessly, as it doesn't need to be connected to your Wii console, allowing you the range of the standard Wii-mote to play with it.

After using this controller for a while, it was evident to me that there really is no other way to play old school beat ‘em ups of this type. It's the little taps and clicks that hardware like this emits that really takes you back to the dark dingy arcade. The functionality of stick controllers combined with that true arcade feel right in the comfort of your living room. Perfect!

When it comes to controller types, there are few game genres that won't succumb to the excellent multi-purpose controllers packed in with modern consoles (Xbox 360, PS3 or Wii). However, occasionally a title comes along that truly benefits from taking a more customised approach to its play style, and Tatsunoko vs Capcom on the Nintendo Wii is definitely one of them; the arcade stick is the way to go.

You can support Jan by buying Tatsunoko vs Capcom Controller