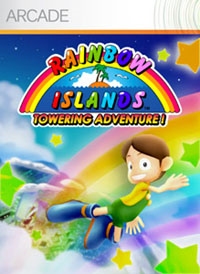 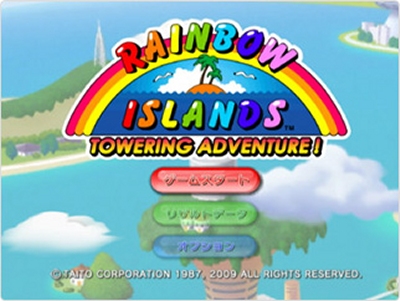 Rainbow Islands: Towering Adventure intelligently updates the Bubble Bobble sequel. Amongst a plethora of spin offs, for the first time we have a fitting follow up to the classic 90's arcade, Amiga and Atari ST hit Rainbow Islands. The games exquisitely balanced Challenge Mode had me transfixed, so I'll be zooming in on this baby for my Closeup review.

The T.A. stands for Totally Amazing! "Taito Legend, Fukio 'MTJ' Mitsuji, passed away after problems with his health on December 11th 2008, according to one source (We are still waiting on something more official)." So reads the wiki memorial for my favourite game designer. I love the platform games he created with a passion (and that works whichever way you read it), spending a huge amount of time with Bubble Bobble and Rainbow Islands before I hit the big one-oh. I preferred the co-operative gameplay of Bubble Bobble, but I loved the quirky charm of both titles.

What you got with Rainbow Islands was a deeply original platformer disguised behind perhaps the most sickeningly cute graphics ever committed to screen. Bad guys never looked so friendly! Who could forget the smiling bomber plane, the teddy bear with the propeller bow-tie, or the tiny bat who transformed into a chubby, ginger vampire and shot out a fat little lightning bolt in your general direction? And the Power-Ups! Kitschy religious symbols, like the bright-yellow crucifixes that made lightning bolts come in from across the screen to vanquish your foes.

I spotted a new version of Rainbow Islands had been released on the Live Arcade, based on the Wii-Ware release. I downloaded Rainbow Islands: Towering Adventure immediately. I loaded it with trepidation, and for a moment my heart sank as it clearly was not the same game that I had fallen in love with as a child. But picking the main Story mode, I was flooded with a sense of familiar joy. They made some really interesting design decisions, but it works.

I warmed to the system that was more subtle than the simple one-touch collision induced death.

The main difference to the 90's classic Rainbow Island formula is that you no longer have lives. In their place you have time. At the start you are granted some time to traverse the vertical kilometre to the top of the level. Then as you play you loose and win time depending on how you do. Hit a baddy and you lose 30 seconds. Collect crystals dropped by each enemy to gain more time.

It's a risk reward thing. The more you can reign destruction upwards on your foes, the more crystals you earns and the more time you get back. I warmed to the system that was more subtle than the simple one-touch collision induced death. The scramble to the top as fast as you can mechanic provides a reliably enjoyable experience each time.

Digging in, I made Challenge Mode my home. Here you try to travel as far as possible in one life. The challenge is to try and minimise the time lost in the earlier rounds so that you can have plenty of time to play with on the later levels when everything becomes a little bit more hectic. I tend to curse my foolish mistakes less and less the more I play. In the earlier levels it is quite possible to rack up enough time to last you for the next couple of levels, and you can feel a real sense of satisfaction each time you achieve the maximum seven baddies combo - one for each colour of the rainbow.

The power ups in the Challenge Mode are the same as the Story and as good as ever. My personal favourite is the yellow wand that turns you into a dangerously cute Weapon of Mass Destruction, spitting out diagonal stars that destroy everything that crosses their path.

The game's pace is vastly improved, and I like that you can recover after making a simple mistake - just like in life.

The story is tangential to the Challenge Mode game and somewhat hackneyed. Something about a mad-professor wanting to prove that rainbow magic is not real and that everybody should be following science. He chases you up each level in a slightly re-designed version of the flying machine he chased you in at the end of the last level. Rainbow magic trumps his invention every time. Viva la rainbow. Ignore it and you won't miss any of the fun.

This game has been written off by a number of reviewers for veering away from a straightforward port of the original game. My instinct is that they have just played for a few minutes and dismissed it. For me they have missed out on what is actually an excellent evolution of Rainbow Islands.

The game's pace is vastly improved, and I like that you can recover after making a simple mistake - just like in life. It should be perfectly possible to have both games without feeling that a re-imagined homage to the original has no intrinsic value.

It is a shame that such a visionary and imaginative designer as Mitsuji has passed away, but we should be very grateful for the legacy that he has left with us. I feel that Rainbow Islands Towering Adventure is a fitting homage to one of his most popular creations and one that you should definitely give a go. The Challenge Mode is a whole world of joy in and of itself, and I still haven't really got into the other modes yet. Superb.