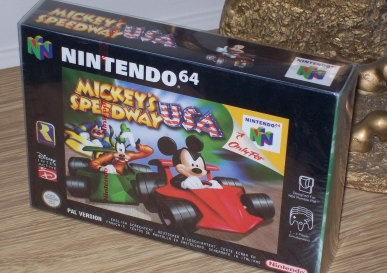 Although films like Toy Story 2 paint game and toy collecting as a reclusive persuit I havent really had any negative comments aimed at my sealed game collecting. Particularly when people see my collection - they are more in awe of how I have so many.

I guess some hardcore gamers would think it's reclusive. But for me, people who spend a large proportion of their time playing games are just as reclusive as me. In fact I think game collecting is as much about community and other people as it is a lone collector stroking his sealed games.

It's like any other hobby - you get to know fellow collectors on specialist forums and sometimes when you buy and sell games on Ebay. It's quite easy to spot listings from another collector, they put that bit extra effort into them. I have also made many good friends on Sealed Game Heaven.

The picture painted in Toy Story of the obsessive toy collector is more a plot devise than observational commentary.

The picture painted in Toy Story of the obsessive toy collector is more a plot devise than observational commentary. I once bought a game from someone who did not know she had something valuable - she only expected to get about GBP10 for this game but I offered her GBP300 for it and she was over the moon. It was Christmas time and she said that she would now be able to give her daughter a special christmas with the money.

Selaed Game of the Week - Tetris on Gameboy

With our Toy Story Disney theme this week, I have a related collector's game of the week for you. Mickeys Speedway USA for the N64 sealed with the red nintendo tear strip. Not the most well know N64 game but a nice any collector. It is fairly easy to get and a good game to go for as a new collector - it usualy crops up on Ebay every few months and is fairly cheap at between GBP30-GBP50. I won my sealed copy a few years ago on Ebay for about GBO10.

You can support Steph by buying Collect Another Toy Story