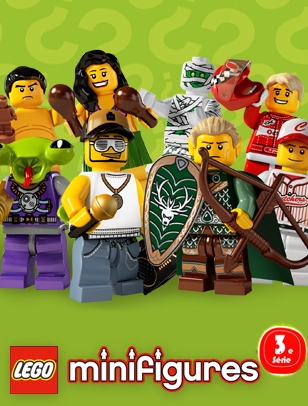 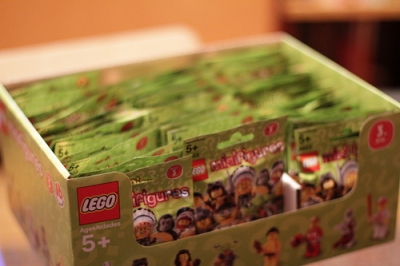 Lego Minifigures Series 3 are filling the shelves of toy shops and newsagents across the country, and are being snapped up by an increasing and avid fan base.

For a couple of pounds you get one figure at random from the set of 16 which this time includes a samurai warrior, an elf, a grass-skirted hula dancer, a rapper with a very 80's ghetto blaster and my personal favourite -- a sweaty man in a gorilla suit.

As with Minifigs Series 1 and 2 the figures all come with a small baseplate so they won't fall over while on display. No doubt there are fans out there getting specially made dust-proof display cases and buying simply for the novelty and future collectability (Series 1 figures are already fetching a hefty premium online). But isn't that just a little bit boring?

I suppose Lego are being canny by making all the figures available for a limited period of time, and also by making the contents of the packet unknown until opened (though I did manage to detect the gorilla man's banana through the packaging!).

As soon as you make a toy limited edition it changes the feel of it.

But the flip side is that as soon as you make a toy limited edition it changes the feel of it. It just seems to matter more if a bit gets lost or broken, and stress levels rise as your kids or your younger siblings want to play. And the truth is that they are just great fun.

You can make most of the Village People (OK - maybe that one's for the mums and dads), and if you were lucky enough to get them you can now populate your Lego Town with a zombie or two (from Series 1) a vampire (Series 2) and a mummy (Series 3).

They are crying out to be played with and whatever their potential future value I'm going to let my kids have them. We've all seen in Toy Story 2 what happens to grown ups who take toys too seriously...


You can support Steph by buying Minifigs Series 3